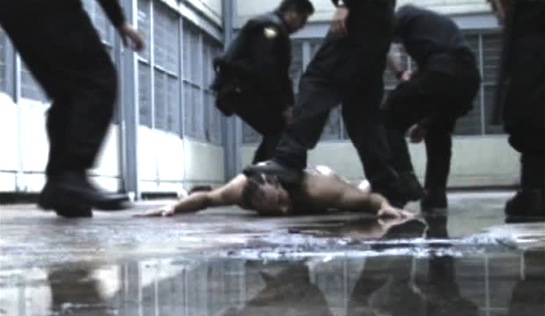 The film’s title translates as ‘God bless you my son – St Martha Acatitla Prison’. It ought not be confused with Bless You, Prison (2002); though both are bleak and revel in the harshness of prison life, this one doesn’t offer much hope of a way out.

Dios te bendiga.. is a series of strangely unconnected stories. A triple-murderer, referred to only as ‘The Monster’, is missing and, embarrassingly, the prison can’t work out whether he has escaped or has been killed – torn into little pieces and hidden by the inmates. After he’s caught, we hear no more of him. A mentally-disturbed prisoner, known only as ‘The Gringo’ (Flavio Peniche), constantly and loudly rails against everything… until he is taken into a yard and beaten. He responds by going on a hunger strike and sewing up his lips. A youngish Bible-carrying prisoner, Motitas (Gibran González), claims to have reformed and convinces the sub-Director to allow him escorted leave out of the prison – then betrays the trust by stabbing another man to death. And then hangs himself.

Interspersed with these stories are many scenes of daily life within the prison. They are common prison movie fare: drug use, an important female official racing off with a handsome prisoner, stabbings, the Director leading a gridiron team, another prisoner being doused with flammable liquid and set alight. “Death and betrayal in every corner,” we’re reminded, just in case we missed the themes of the main plot lines.

At the prison’s helm is a young Director, Carlos (Carlos Peniche). It’s no doubt intended that he be seen to be tough… but with a sensitive, rehabilitation-loving side as well. It leads to some very funny scenes where his machismo is shown to be nothing but bluster. “Bring him to me!” he snarls, when The Monster is recaptured – the meaning of which is clearly “I want to deal with him personally!” When The Monster is brought in to see him he says, with some menace, “I’d be extremely pleased if you told me how.” The Monster shrugs. “How the hell did you escape, moron!?” The Monster respectfully tells him that his life is already in danger, apologises that he can’t tell him, but notes that there are plenty of ways to escape. “Fine,” says the Director. “You will tell me eventually,” and lets him go.

The film’s message is later wrapped up in a few moments of sober conversation between the Director and his deputy, Eleazar (Eleazar Garcia) after a hard day in the office. Eleazar reflects on the challenges of their job: “You laugh, you cry with them. Sometimes you can learn something. You see them suffer and you suffer with them. It’s hard. But I don’t think there’s a solution. We’re in prison. This is a scary place.” Carlos nods: “Scary. Evil. Perverted. Full of suffering. But we must not judge them. We can only do our job. That’s all. And believe me, I’m really worried about their rehabilitation.” “How many do you think can be rehabilitated?” Eleazar asks. “Sadly, only a few.” Those who aren’t stabbed or beaten, perhaps.

And just to make sure that you don’t miss the point, the extremely annoying soundtrack features a distant, guttural growl whenever the vision moves into the cellblock or the prison proper. Scary, evil, perverted… and possibly full of zombies. 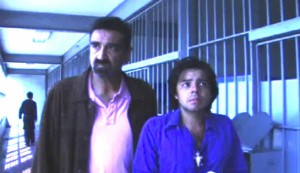 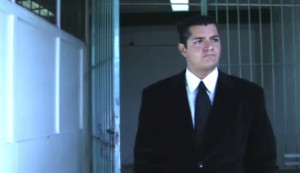