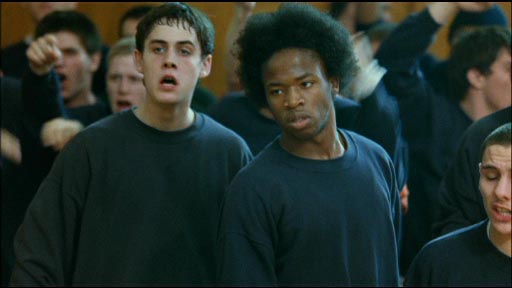 A trans-Atlantic Scum, this is…  based on that acclaimed British movie from 1979, and every bit as bleak.

But there is one key difference: whereas the staff in Scum prop up the corrupt system, in Dog Pound the tragic outcomes occur in spite of the staff, who for the most part are well-intentioned and simply trying to do their job. In the British version the sense of despair comes from the realisation that there is no will on anyone’s part to change things. In this one, the will is there, but the feeling is more of impotence… of being absolutely defeated by the very nature of the young men inside.

Those young men include three ‘strays in the dog pound’ who arrive together at the Enola Vale Youth Correctional Centre in Montana. Davis (Shane Kippel), is a likable 16-year-old self-proclaimed ladies’ man, convicted of possessing narcotics with intent to sell. He’s not tough – at least not in this company – and because he’s not tough, he’s vulnerable. Angel (Mateo Morales), 15, is quiet and a car thief with a handy sideline in violence. But he’s young. Last is the dangerous Butch (Adam Butcher), 17, who already has an imposing track record of violence (triggered, it seems, whenever he is aggrieved at his own or others’ maltreatment), having newly arrived from another youth facility where he had taken a correctional officer’s eye out in response to being struck by the man several times for no great reason.

A sign in the visits centre says, “Enola Vale – A Place to Grow & Learn” and the irony of the message is not missed on us; the trustees, who have risen to that status by supposedly acknowledging the poor choices they have made in life and committing themselves to lives without crime upon release, run the drugs, terrorise the new receptions and create an environment of fear in which it is impossible, one presumes, to either grow or learn. Learn anything pro-social, that is. Banks (a convincingly menacing Taylor Poulin) is the leader of the trusted thugs, and you know that it is only a matter of time before Butch – who seems to be in a state of constant seething – will avenge Banks’s misdeeds with unbridled violence.

You could be forgiven for thinking, if you were Banks and his crew, that you might need to treat the lunatic new kid who has just maimed a staff member with a bit of caution. The magnitude of their misjudgment in assuming that Butch will bow to their authority on the basis of a few strong-arm tactics, is matched only by the bewildering trust placed in them and the inability of staff to realise the mischief they are up to.

It’s not a facility characterised by orderliness, and we lurch from bad to worse. The violence escalates, the career of the basically-decent unit manager, Goodyear (Lawrence Bayne), explodes in one fateful instant as he tries to juggle the stresses of work and family life, and one youth suicides after being raped, prompting a riot during which all of the staff’s previous well-meaningness rapidly evaporates.

I have previously described Scum as ‘unrelentingly grim.’ Dog Pound tries to relent on the grimness with a few pockets of ribald, adolescent humour, but the film can offer no solution as to how to bridge the gap between the center’s espoused values (‘Respect. Integrity. Attitude’ another wall proclaims), and the predatory nature of large group of impulsive, testosterone-fuelled young men wishing to assert themselves as hard men. Accordingly, it’s grim.

As with Scum, the sense of dread never leaves. Even when the bullies in both movies are themselves subjected to humiliating beatings, the viewer can’t relax as the usurper is just as disturbed, if not more so, than the horrible young man they have deposed. That Butch seems to reserve most of his brutality for those in authority (both inmates and staff) does not make you feel any more comfortable for the vulnerable kids, who are almost certain to get caught in the crossfire.

Butcher is the star, his ready-to-boil-over edginess scary – and his performance almost matched by those of Kippel, Poulin and Bayne.

If you’re looking for an uncomfortable, disturbing film experience, Dog Pound is unlikely to let you down. 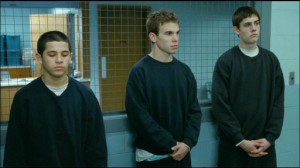 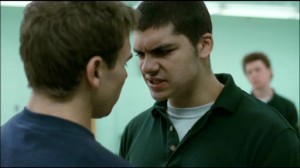