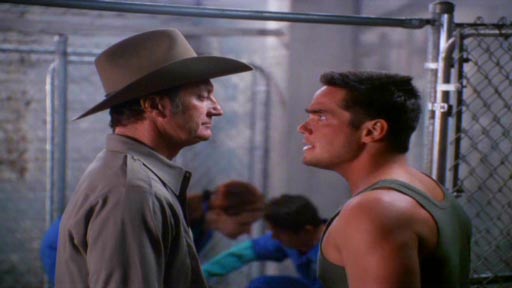 Fascinating prison, this. There’s this solid, imposing wall surrounding a maximum-security prison, around which – if I’ve got this right – there are acres and acres of Toronto forest and a scalable, razor-ribbon-topped fence. It’s a prison where prisoners escape over the 7 metre wall with ease, only to routinely get run down by highly trained attack dogs in the foresty bit. No wonder people start asking questions.

Julian Taylor (Dean Cain) is the new fish. He’s an ex-Marine who can look after himself, and within minutes he has made a mess of a big African American dude who wanted to make him his bitch. After a spell in the hole, he’s conscripted into the role of dogboy – helping look after the prison’s German Shepherds and rottweilers. Much of the work comprises ‘laying tracks’ – running as fast as he can through the forest in a padded vest and arm guards, providing practice for the dogs to find the ‘escapee’ and bring him down.

The dogs are the pride and joy of Captain Robert Brown (Bryan Brown), fresh from outback Australia. As far as evil prison guards go… well, he’s far from the most frightening. Even the tough prisoners soon show themselves to be not that tough. And the dogs… well, they seem nicely trained to appear vicious, rather than actually being vicious. For which I’m sure Dean Cain and his stunt double were grateful.

Anyway, it’s a pretty standard thriller. Julian knows that something’s up when one of his fellow prisoners, Willie B, tries to confide in him and then winds up dead, having carelessly entered the cage of one of the killer dogs without having secured the dog in his safety pen. And there is this constant stream of prisoners who are desperate to escape and who are pursued by the dogs and all wind up dead, too.

Deputy District Attorney Jennifer Dern (Tia Carrere) also knows that something’s up. She’s investigating something at the prison, and tries to enlist Julian’s help. Wrong man, he tells her. She’s up against it. She’s a woman, she’s beautiful, she’s young, she’s not a redneck, the warden and his captain are clearly crooks, and the prisoners are too frightened to say anything.

She’s in luck, though. Julian sneaks her a vital clue. And on one occasion she walks straight into the warden’s office while he’s playing strip poker with three half-clad women.  You’ve got to think that if security is so lax that a Deputy DA can simply walk into your jail and surprise you, it shouldn’t be too hard for her to expose a bit of corruption or a little cover up.

Pretty Deputy DA and a good-looking ex-Marine versus a hip-flask-swilling crooked warden and his evil killer-dog-obsessed captain? Not a fair fight, really. 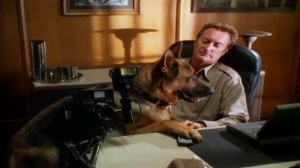 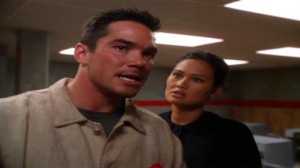 Owes a bit to Mean Dog Blues (1978) – also about a crazed Captain and his attack dogs.