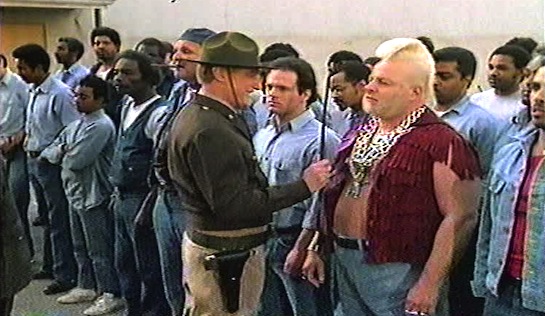 Made by some of the same people who brought you Police Academy I and II. That’s as much as you need to know, really. Or if it’s not, the fact that it has yet to make its way to a DVD release probably tells you much the same thing.

Duke Jarrett (Jeff Altman) is a salesman, selling cryogenic options door-to-door. At one such door he’s invited into the home (and bed) of an older woman, Denise, who turns out to be the Governor’s wife. When the Governor returns home she cries rape, and Duke soon finds himself cooling his own heels in the John Dillinger Memorial Penitentiary.

If one held any hopes at all about the quality of the humour on show here, they are soon dashed when we learn that the Warden’s name is Fallis. Fallis (Pat McCormick) has overseen a number of innovations in the prison, such as the prisoners making and broadcasting their own TV shows. And allowing lavish prisoner parties. Inevitably he is seen to be too soft on criminals, and is replaced by the Governor’s brother-in-law (the brother of Duke’s ‘victim’), Morgan ‘Mongo’ Mitchell. Mongo is full of bluff and bluster, is lovelorn and ineffectual; several of his humiliating attempts at bedding his secretary provide much of the film’s entertainment as they are broadcast live both in and outside the prison.

Duke, meanwhile, is almost as unconvincing as a prisoner. He tries desperately to bed the attractive prison psychologist, Dr Vicki Norris – or Dr Walker, depending on which part of the film you’re watching (Dey Young); punches Mongo in the face after successfully negotiating with a prisoner to surrender the gun with which he was holding a guard hostage (only for the Warden to renege on his undertaking to let the man ring his mother); and – to ensure Duke does not forget who his victim was – is made to fight a bulked-up guard in a boxing match (a fight he ultimately wins when the prisoners manage to move his opponent around the ring through the use of giant magnets).

The film’s humour is low-brow at best: Duke farting during a cavity search, a long termer expressing his admiration for another’s appendage, hamburgers cooking on the electric chair, the Parole Board making a decision based solely on a dubious musical presentation by the prisoner, a muscular prisoner, Animal (Nicholas Worth) bobbing for captive piranhas, and a couple of Cool Hand Luke spoofs (the egg-eating contest and the road-building scene) for good measure. Hits and misses, with the hits few and far between.

Not even a (very) brief appearance by Mohammad Ali (playing himself in what would ordinarily be a dream sequence, but here is more of a concussion sequence, during Duke’s boxing match) can unfortunately add much interest to what is a pretty lame effort.