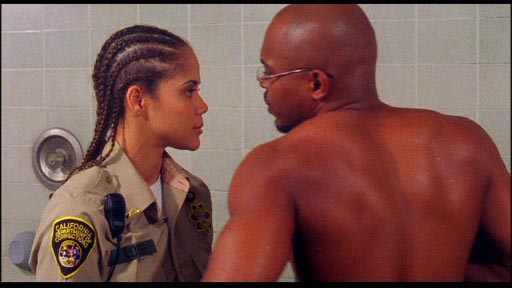 This hints at being a straightforward revenge story: grieving father seeks to avenge the death of his son. It starts with a couple of biblical references about vengeance and man being called upon to shed the blood of those who shed blood. Curiously, it then introduces a little-known footnote to Exodus 21: 23-24 (“a life for a life, an eye for an eye..”) along the lines of ‘if your son is shot through the eye, shoot the shooter through the eye’; you are not merely called upon to avenge the death, apparently, but to avenge the death using exactly the same method. In jail, that can add considerably to the degree of difficulty.

Michael Mitchell’s young son Chase is caught in the crossfire as two drug dealers pursue each other through the streets, firing at the other with disturbing inaccuracy. He is fatally wounded by a stray bullet which goes through his eye. When it comes to court, the prosecution can’t prove who fired the bullet, and both of the accused go down only on drugs charges. Michael (Boris Kodjoe) is consumed by grief. He soon tells his wife to leave (she is too keen to move on from the tragedy) and spends all of his time with his good mate, Jack Daniels.

Michael devises a plan. When he is pulled over by a cop for drunken-like driving, he viciously attacks him with a billiard ball in a sock, leaving him crippled and incontinent. It’s not explained why he chose an innocent policeman to attack. Why not a drug dealer, a serial rapist or a reality TV producer? Why not commit something a bit more victimless, like trying to defraud the Government? Why continue the attack for so long and with such ferocity that the victim could never walk again? Would the first couple of unprovoked blows not have earned him a jail sentence? Any sympathy we might have had for the distraught father rapidly diminishes, if not evaporates entirely.

He goes to jail. For a man who has been doing little other than abuse alcohol for months, Michael enters prison looking remarkably fit. Ripped, in fact. The prison authorities know that one of the men responsible for his son’s death, Curtis ‘Durty Curt’ Craig (Michael K Williams), is also there; Durty Curt having already taken care of his co-accused. The authorities take no action, knowing that to keep the two men apart would bring the film to a premature end.

The prison authorities are not depicted in a particularly flattering manner. They openly take slings. Mind you, the Captain doesn’t waste his bribes on fast cars and booze and loose women, but on a sensible hearing aid. His ubiquitous offsider, the attractive Lt Elaine Lodge, has a habit of supervising the men in the showers, and at one stage even gives the prison king-pin, Mathematic (rapper Sticky Fingaz) a slap on the backside while he’s in the buff. I think not. The prison counsellor is also something of a tease.

Inevitably, Michael and Durty meet. Does Michael punch him? Stab him? Iron bar him? No; too easy. Instead, he retires to his cell where he makes a papier-mâché gun capable of firing a real bullet, which he has smuggled in. An eye for an eye, you see. And what do you do with a home-made gun in prison? You hide it in what appears to be a cavity in the plasterboard wall of your cell, that’s what. They don’t make cells like they used to.

There are some glimpses of what the prison experience might be like. Michael is forced with withstand pressure from Mathematic to join his crew. Durty’s gay cellmate, the jail bookie Clever (William L Johnson), upsets Mathematic and is brutally raped. Durty tries (a) to survive and (b) to juggle both an ex-girlfriend and a current girlfriend. But none of the characters are likable (or credible) enough for us to really care what happens to any of them.

We know that there has to be a climactic showdown between Michael and Durty. The best that can be said for it, when it comes, is at that it is unexpected. That is not to say that it is good or believable. Like the film, it’s really just a piece of dross. 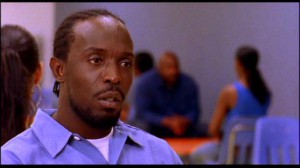 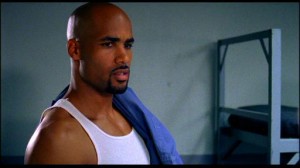