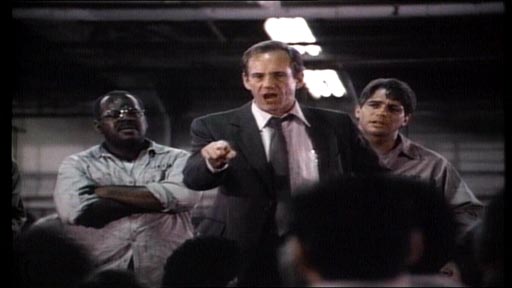 Also known as ‘Truth or Die.’  A mediocre made-for-TV film based on the true story of Jerome (Jerry) Rosenberg, a small-time Brooklyn criminal who hit the big time in 1962 when he and an associate were charged and convicted of the murder of two policemen during a robbery.  Sentenced to die by electric chair, he was saved after New York first abolished the death penalty (with killing Police one exception), after which he mounted a successful legal challenge to his own death sentence.

The film stars Tony Danza, trying his hand at a serious role after gaining fame in the sitcom Who’s the Boss?, and for much of the film he looks out of place: an Italian-American comedy actor making a poor fist of a Jewish petty crook.  The unschooled Rosenberg did a correspondence course in law and graduated as a lawyer, going on to represent other prisoners and attempting to mediate the 1971 Attica riots (in which 29 prisoners and 9 of their prison guard hostages were killed by riot squad bullets, another guard died of prisoner-inflicted head injuries and another four prisoners were fatally stabbed by their colleagues).  The film charts all this, but unconvincingly – partly due to the low budget and partly due to limp script and production. The riot, for example, is confined in the film to one workshop, rather than the massive disturbance in the real rebellion, but there are no such excuses for things such as the succession of bizarre casting decisions for Jerry’s daughter(s) from birth to young adult.  Film reviews have variously referred to the film’s ‘overweening triteness’ and claimed that it ‘opted for manufactured sentimentality over reasonable accuracy.’

When the film was made, Rosenberg was still in jail, unable to get parole.*  The filmmakers skirt around the issue of whether he  was actually guilty of the murders (he steadfastly maintained his innocence), but are ultimately sympathetic to him; like The Birdman of Alcatraz the film takes the view that whatever he’d done, he deserved another shot at freedom.  In a country that imprisons people at seven times the rate of my home State, advocating the release of a man who killed two Police (if he did it) after just 16 years (24 by the time the film was made) is brave, strange, or both.  Maybe that’s why it was made in Canada. 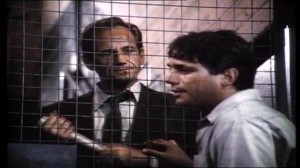