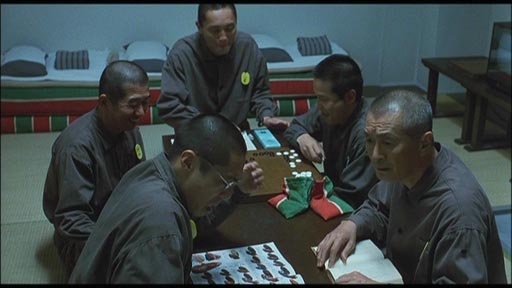 An extraordinary prison film, defying classification.  Based on a manga by ex-prisoner Hanawa Kazuichi, it details the humdrum life of prisoners in a Hokkaido prison, chronicling their unquestioning submission to the regimented regime, and their happiness in their institutionalisation.  It is hard to imagine a gentler, more wistful movie about prison.  There is no real plot, but the film centres on the main character and narrator, Hanawa (shown as an older man, in his 60s, perhaps), who is obsessed with guns and lands in prison for possession of illegal firearms and explosives.  He and the four others who share his cell willingly ‘surrender (themselves) utterly to the routine, arbitrary rules and the grinding sameness of life in the prison system’, to quote one reviewer.

Every aspect of the prisoners’ lives is strictly controlled; the inmates have to seek permission to do just about anything and happily submit to the rules, the discipline and strict routine.  They find childlike delight in the prison food and the petty details of their lives; the prospect of sweets and soft drinks at the regular film nights is enough to sustain them for some time. There is little tension and no violence, although the guards are sometimes moved to yell at the prisoners (‘How dare you!’ one barks at a prisoner before dragging him off to solitary for doing another’s crossword puzzle, and the five men are strongly rebuked for fooling around in their cell: ‘This is not a school trip!’).  When all five are put into solitary for recording each other’s addresses on tiny pieces of paper, Hanawa finds comfort in his solitude and doing his repetitive paper folding tasks, and knows he could adapt to that life forever. Back with others, he is happiest when he finds a fellow traveller who shares his penchant for soy sauce in his rice.

Understated in its humour, full of quiet sardonicism and more than a little sad. 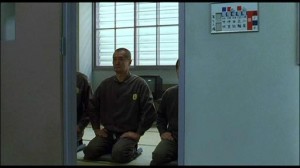