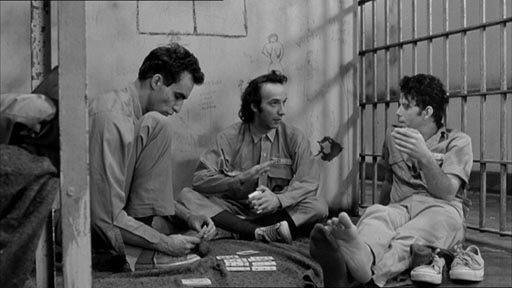 This is a prison escape movie, but it’s the antithesis of an action film, and probably not even a prison film, really. Filmed in stunning black and white, it is deliberate, slow, and consciously off-centre.

It features a couple of lacklustre characters – Zack (singer Tom Waits), an aimless, jobless DJ caught driving a car with a dead body in the boot, and Jack (John Lurie), a small time pimp who is busted trying to recruit a very underage girl in a hotel room – who get thrown into the same cell at the Orleans Parish Prison. Both have been horribly set up. They are then joined by an ingenuous but more energetic and slightly comical Italian tourist, ‘Bob’ (Roberto Benigni), who delights in collecting colloquial phrases. He is excited by the American dream that his cellmates have well and truly let pass. He is also guilty. The prison scenes form the smaller part of the movie, and consist entirely of the one cell and its inhabitants, a brief cameo from a guard as they get led out to exercise, and a knotted sheet as they effect an unlikely, filmic escape. As they blunder through the Louisiana bayou, there is the reassuringly familiar sound of bloodhounds in pursuit. The swampland could be just another place into which they’ve drifted and from which they must escape, or it might be a nod to clichéd scenes from other movies, or it might be a motif for things that are big, murky, incomprehensible and unresolved. Or none of those things; perhaps I should have listened to director Jim Jarmusch’s commentary. Anyway, the three men drift into an improbable encounter in the middle of nowhere with an Italian woman who falls for Roberto, the bloodhounds’ pursuit peters out inexplicably, and there is much more that remains vast and unresolved.

Quirky, atmospheric… but a bit dull. 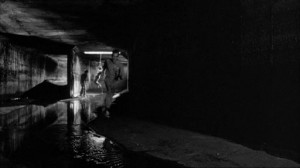 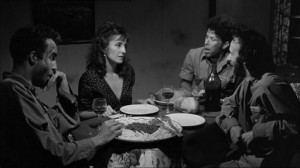