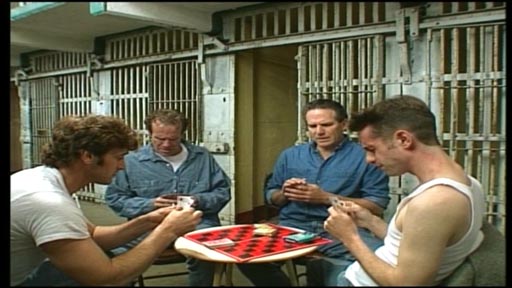 This is not a film that you would ever watch twice. It’s a low-budget offering that offers realism (the writer and director, Sean Wilson, has seemingly done time and the movie is based on his experiences) but forgets that ‘real’ doesn’t necessarily translate to ‘interesting’.

Slim Williams (William Van Nolan), a junkie, is busted in the middle of a big drug deal. He goes to a County Jail, which is violent and unpleasant, does a deal which sees him get eight years and is sent off to San Quentin, which is violent and unpleasant. It’s your standard survival-in-prison story. The problem is, there’s very little plot development. It might show exactly what those jails are like, but it quickly becomes tedious eavesdropping on groups of prisoners playing cards and talking shite, particularly when the sound is abysmal and the camerawork dull. Sure, Slim smashes one tough guy’s head in, there are fights and stabbings and a newly-received prisoner hangs himself after being raped. And there’s a good sense of the constant hunt for drugs and blokes getting out of it. But one couldn’t care less about any of the main players.

Slim gets released suddenly, as if he picked up a ‘Get out of jail free’ card in Monopoly, but is soon visited by his double-crossing partner-in-crime who comes to collect his share of the loot that Slim had improbably double-crossed him out of, and in an exchange of gunfire gets shot and his ex-partner and ex-girlfriend wind up dead. We then discover that the sweat-drenched Slim who has been narrating this excruciating story throughout is actually telling it to a prostitute in Mexico – where he has run to avoid parole violation – still suffering from a bullet wound to the shoulder. Not suffering enough, for my liking.