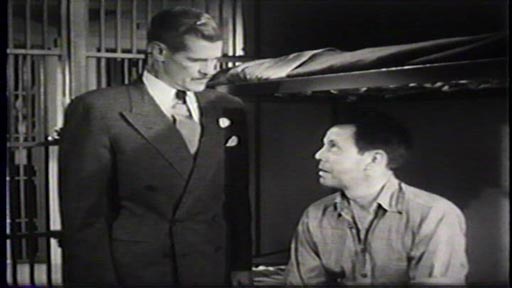 Having cringed through Men of San Quentin (1942), an unabashed tribute to Warden Clinton T Duffy, I prepared myself for an even greater festival of self-aggrandisement in this flick – particularly as this one was based on the Warden’s own reflections and released just two years following his retirement after 12-odd years in the job.

So it came as something of a surprise that the film chooses to show Duffy’s heroic leadership principally through the story of one prisoner, Edward ‘Romeo’ Harper (Louis Hayward), whom Duffy guides down the path towards reformation.

Duffy is played by Paul Kelly, who had served a couple of years on jail on a manslaughter charge 25 years earlier (the result of him inflicting fatal injuries on his lover’s alcoholic husband). Kelly had a heart attack around the time the movie was made (and was to die from a second one, two years later), and plays Duffy as though constantly steeling himself against heart pain. Or piles. The filmmakers are keen to impress upon us Duffy’s unwavering integrity and single-mindedness; sadly, Kelly’s character has no warmth, no humour, no spontaneity, and is a person few would want to follow willingly.

Duffy (who in real life was the son of a San Quentin guard, grew up in the prison grounds and married the daughter of a Captain of the Yard) starts the film as secretary to the Warden during a period of riots, mayhem and turmoil. He is asked by the San Quentin Board to take over as Warden for 30 days when his boss is moved on; he resolves not to die wondering.

He promptly replaces the old-school Captain of the Yard, hires a female nurse, empties out the solitary confinement cells and, less conventionally, brings an end to the stoolie system – refusing to condone any system that could turn “a right guy into a stool pigeon”. And reaches out to hard-nut Romeo.

Duffy’s refusal to use stoolies looks likely to cost him his job; everyone seems to know that an escape bid is afoot, but the ‘straight-down-the-line’ Warden will no go back on his word and lean on prisoners to find out who it involves. In a vote of support for the extension of Duffy’s 30-day trial, Romeo and his friends deliver to Duffy a bundle of would-be escapees. Why the criminal code doesn’t kick in and place Romeo at risk for having foiled the escape is not made clear.

Duffy rewards Romeo (whose chip on his shoulder is partly because he’s innocent and partly because he was treated badly by the deposed Captain), with a job as a male nurse in the hospital. When the new nurse Anne (Joanne Dru) arrives and takes charge, Romeo leads a minor revolt against her; partly because she takes away some of the prisoners’ symbols of trust, but mainly because his amorous overtures to her are rejected. He is wounded, belittled, no longer to be relied on.

So he faces a bigger test when crooked prosecutor John Winant (George Macready) comes into the jail on bribery charges. Romeo blames Winant for his conviction, insisting that the prosecutor intimidated defence witnesses so they left town, and hid evidence from the jury; he has previously threatened to kill him. Duffy’s response is to make Romeo responsible for looking after him in the prison. Romeo’s response is to set Winant up to be killed by others, but when Anne suddenly declares her love for him, he manages to thwart the killing that he arranged. We see that Duffy’s example of righteousness can lead men to overcome even the most bitter hatred; that his influence can defeat base men’s basest instincts. Well, not really; were it not for the prospect of a fling with a pretty woman, Romeo would have happily seen Winant die a miserable death. The message is possibly a bit confused.

On seeing Romeo’s selfless defence of him (well, not entirely selfless), Winant is moved to confess to more trial-rigging (including Romeo’s trial) and Romeo is freed. He and Anne get to consummate their love after all. Sigh.

One hopes that the film similarly consummated Duffy’s love for his Wardenship. 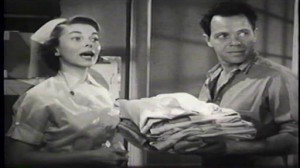 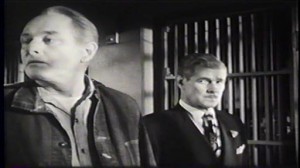