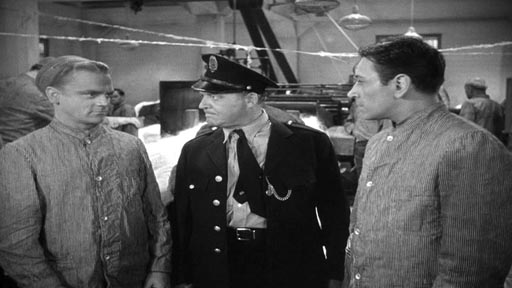 One of the better 30s prison films, thanks to fine performances from Jimmy Cagney and George Raft.

Cagney plays Frank Ross, a tough investigative reporter who blows the whistle on graft and corruption by local officials, including the District Attorney. Before he can do more damage, he is abducted, hit over the head, doused with alcohol and then set off unconscious in a car that crashes into another, killing three people. Unable to prove his innocence, he gets 1 to 20 at Rocky Point Penitentiary (filmed partly at Sing Sing in New York), where he meets gangster Hood Stacey (Raft) who is doing 199 years and hasn’t a lot to lose. Ross believes that his newspaper friends will get the evidence to exonerate him, but they get nowhere and Ross gets dragged more and more into the prison politics.

It’s said that the movie played its part in securing prison reforms, but the regime isn’t that bad (not by movie standards, anyway); it’s presided over by a strong and decent warden and punishments aren’t meted out arbitrarily. Well, there is one guard who terrorises the inmates and strikes one ailing prisoner so that he falls, hits his head and dies. That’s not good. And there is ‘The Hole’ into which recalcitrant prisoners are sent, their hands cuffed to the bars – but in a State with no capital punishment, it is explained, there has to be some disincentive to bad behaviour. And there’s a rule of no talking by inmates except at recreation, but that’s breached so often by the protagonists as they work in the jute factory that it hardly means anything.

Anyway, Limpy, an arch enemy of Stacey’s, gets a shiv in the back and Stacey is a prime suspect. He asks Ross to rat on him so that he can get charged and taken to court, from where he intends to escape. Ross wants no part of it on ethical grounds, until Stacey promises to track down the bloke who gave him up to his abductors; Ross’s ethical objections then evaporate. Stacey duly escapes and Ross, who had alerted his newspaper buddies to be at the court for something big, implicates himself in the whole deal. He spends months in solitary down The Hole, where he becomes as uncontrollable and screw-hating as the best of them. He misses parole because the crooked DA has installed one of his cronies as the Parole Board chair… and just maybe because he’s been poorly behaved and helped a gangster escape.

Then it starts to unravel a bit, credibility-wise. Ross’s girl goes to Stacey’s hideout and convinces him that Ross is doing all this time in solitary on his account, and that Ross hadn’t given him up by inviting all his newspaper mates to be there. Stacey is suddenly struck by Ross’s loyalty, finds out who framed him, surrenders himself back into jail to tell Ross, they all get caught up in a riotous escape bid against which Ross voices his opposition (on ethical and self-preservation grounds), and they extract a confession from another prisoner at gunpoint in the presence of the warden that he was in on the deal to frame Ross… just as the troopers storm the prison and kill just about everyone. 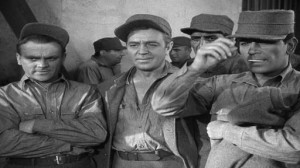