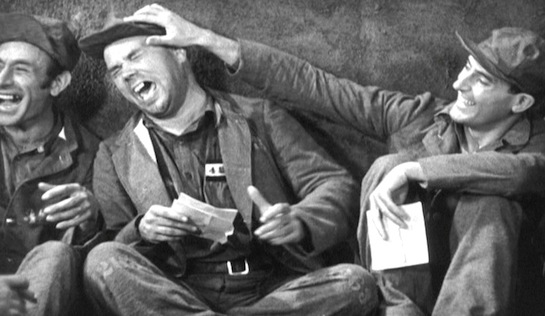 How different can an American Spanish-language film be from its near-identical English-language counterpart, when essentially the only difference is that Spanish-speaking actors are substituted for English ones? Quite a bit, really.

El Presidio is the Spanish version (and virtual scene-for-scene replica) of the celebrated The Big House (1930), and the French-language Révolte dans la prison (1931). The three films share almost all the scenes in which the actors’ identity is not an issue.

The story is naturally the same: 22-year-old first-timer Kent Marlowe (Tito Davison) is sent down for 10 years after a fatal car crash. He is placed in a cell with prison-hardened multiple-murderer Butch Smith (Juan de Landa) and fraudster John Morgan (José Crespo). He is fearful, privileged and insipid; they are the prison’s top dogs, and despite regular Alpha male buttings of heads, are as thick as thieves. So to speak.

Morgan’s parole is revoked the day before his intended release after Marlowe, not wanting to be caught with a knife Butch has left behind, plants it in Morgan’s jacket and allows him to take the blame. Morgan escapes soon after, and tracks down Marlowe’s beautiful sister, Ana (Luana Alcañiz), intent on revenge – but falls in love with her instead.

On being recaptured and returned to prison, Morgan declines to join in on a big escape plot hatched by Butch, wanting to do the right thing by Ana. When the armed, would-be escapees are confronted by rows of guards firing at them, Butch suspects that Morgan has ratted on him, and goes after him. The real stoolie is, of course, the spineless Marlowe. Butch discovers this just before he dies from a gunshot wound inflicted by Morgan, and they reconcile as Butch takes his last breaths. Morgan is hailed as a hero for saving guards’ lives and is pardoned into Ana’s waiting arms.

The Big House is considered the grandfather of all prison movies, and is indisputably an extraordinary, epic film. This, too, is a little epic, but it pales against the other two versions – for the simple reason that de Landa’s Butch is not nearly as compelling a figure as he is in the English and French-language films.

Butch’s character is complex – he is a desperate killer who at the same time is often childlike and ingenuous; both gruff and endearing. In this version, though, he is more scarred tough-nut than child; in the others, the balance is more even. It doesn’t work nearly as well here. And El Presidio‘s Marlowe is a little tepid for my liking.

This remains a good film, maybe a very good one, and is extraordinary when you think of other films of the same era. It just doesn’t compare favourably with its English and French-language counterparts.