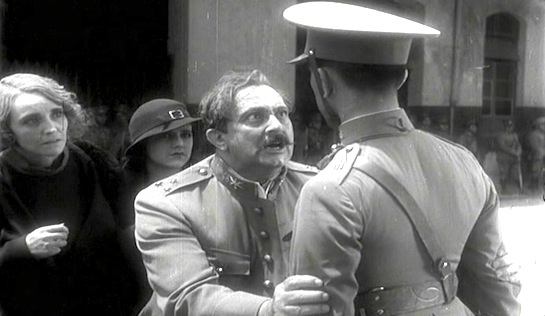 “Then I woke up, and it was all a dream.” Or, in this case, an alcoholic stupor. It’s not clear what possessed director Fernando de Fuentes to settle on such a lame contrivance with which to end this film – an irresistible regression to childhood, perhaps, or a fear (more than ten years after the Mexican Revolution had just about petered out) that the army or their political masters would still take issue with him portraying them as corrupt… Either way, it’s an irksome way for the film, reputed to be the first major Mexican movie, to conclude.

Although the detention of a group of political prisoners is critical to the plot, this is a good ol’ melodrama which manages to pretty much ignore the prisoners. It’s not a prison movie.

Instead, at its heart is the bombastic Colonel Julián Carrasco (Alfredo del Diestro): drunkard, womaniser and wife-beater, whose wife Marta (Adela Siqueiro) sensibly walks out on him, taking Juan, their young son, with her. He is persuaded by a friend to let his wife bring up his son alone, and to not pursue his boy until the mothering work has been done.

Twenty-odd years later, a group of anti-Government conspirators is rounded up on the Governor’s orders and detained. Immediately, the desperate mother and sister of one of the men, Felipe Martinez, approach Carrasco through an intermediary, Signor Zertuche (Luis G Berreiro), offering him money to secure his release. After pondering the ethics of accepting the bribe for a millisecond, Carrasco agrees. So desperate is Señora Martinez to get her son back she sells her home to a usurer for a fraction of its worth to raise the money. Carrasco duly releases the boy back to his family and then, on being advised by the Governor that all those whom he had detained are to be executed, orders that any young man who looks like Felipe be arrested to take his place before the firing squad.

Of course, the young man taken arbitrarily off the street turns out to be his long-lost son, Juan (Arturo Campoamor), now all grown up. Marta and Juan’s girlfriend Lola (Alicia Bolaños) make a night-time dash to the Colonel’s residence, asking guards to wake him so that he might intercede before it’s too late, but his soldiers are disinclined to believe his wife’s story and even more disinclined to risk their boss’s fury at being unnecessarily roused. The first group of prisoners is executed at dawn, and the second group, including Juan, is led to the execution ground just as Marta finally gets to warn Carrasco that his soldiers had arrested his foppish son.

As the firing squad’s rifles are raised awaiting the order to fire, Carrasco wakes from his drunken reverie, thinking he has killed his son, realises it was all a dream, and swears off liquor forever. Oh dear.

Thank goodness, though, that Señora Martinez didn’t really lose her home, that the nice rebels weren’t really executed by that nasty firing squad, that the crapulent Carrasco finally resolved to disinebriate, and that the boy and his mother will soon be reunited. Nice Juan, Fernando! 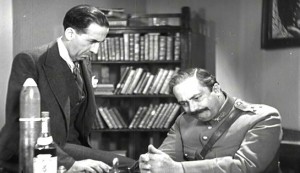 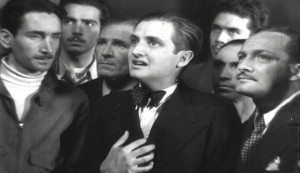