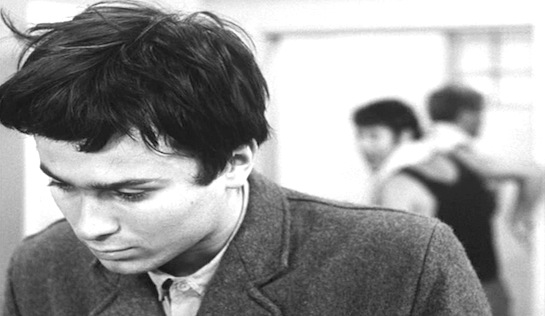 A teenage thief, Jakub Bartoš (Otakar Prajzner), tells a court that he is the ‘sheriff’ or boss of his gang – hoping to both protect and curry favour with its real leader. He gets two years in a youth detention centre but hopes that through good behaviour he might get out in one – and share much sooner in the spoils that the gang has hidden. It doesn’t quite work out that way.

In the first instance, he doesn’t have the presence to match the bravado of his undertaking. The reality of prison brings him to tears on his first day. And he is so keen to earn the year off his sentence that the other boys view him with suspicion, recognising that anyone so desperate to impress those who might sign his release papers might also be easily persuaded to snitch on his colleagues. Inside, he’s an outsider.

Director Dimitrij Plichta sets out to ‘(destroy) the illusion of false friendship, camaraderie and membership in a gang that for young men is the beginning of trouble’. What applies to Jakub’s gang on the outside is also true of the group of offenders inside. The top dog in the dormitory, Viktor (Ji?í Sedlmayer), is a bully challenged by no-one; all the others fall in behind him to avoid being themselves targeted by him. Jakub is nowhere near strong enough to stand up to him, is badly beaten and ends up making Viktor’s bed and shining his shoes. The guards, of whom Frajer (Viliam Polónyi) is the most central, are paternal, benign and take a long time to intervene.

We are reminded, throughout, that these are not just gang-members and criminals but boys. They line up to receive illegal, and crude, tattoos – marking their membership of the group and celebrating their shared rebelliousness in flouting the rules. They show off in front of girls. “I work 150 per cent; I scored three goals (in a handball game),” Jakub proudly reminds the warden when trying to put his case for an extra visit. And even Viktor, when there is no contact from his mother, loses his cockiness and is unable to hide how knocked about he is.

This is not a fast-paced film, and the version I watched was not helped at all by some cryptic sub-titles. But it has an authentic feel (it was filmed at a youth detention centre in Libkovice) and deals with real issues confronting young men in prison. Plus its actors are largely drawn from the ranks of non-actors, which probably does help.

Ultimately Jakub, leaving aside the counsel of his friend Slávek (Petr Svojtka), the miserableness of the existence he sought for himself, and all his allegiances and loyalties, has to make some choices. “How can we trust you (to return to civilian life) if you don’t have the guts to stand up against the bad?” asks Guard Frajer of all the boys once Viktor has been sent packing. It’s the question to which Jakub and all the others must find the answer.