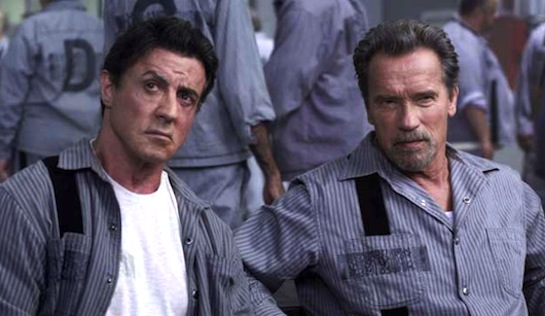 There’s something a little pathetic about two ageing action heroes reliving their glory days from the ’80s. Granted, neither Sylvester Stallone nor Arnold Schwarzenegger looks mid-sixties, exactly, and they make a far better fist of playing action heroes than the younger but tumescent Steven Seagal in Maximum Conviction (2012). But it’s a worrying trend; I’m not looking forward to seeing Chuck Norris and Burt Reynolds wreak havoc in a palliative care prison.

But back to Escape Plan. Ray Breslin (Stallone) is an authority on prison security. His job involves him going undercover into maximum security prisons and then escaping, showing up weaknesses that no-one knew were there and that not-so-grateful Wardens are then compelled to remedy. We see him miraculously escape from one prison, and then show us how it was done; he was able to get out of his cell by working out the number of the keypad that unlocked his door. Really? A keypad?

Breslin has some deep motivation for doing this dangerous work, but exactly what it is remains a bit cloudy. It involves him being a prosecutor, and sending someone away, and his wife and child who no longer seem to be around. But you may be assured that it’s deep. Then he’s approached by the CIA which wants him to go undercover in a privately-operated, top-secret prison holding the world’s worst criminals (i.e. those who are not already locked away). The super-secure prison, ‘The Tomb’, has been built to the super-secure standards he has set out in a book he has written. It’s ridiculously dangerous – but he is to get an exorbitant fee for going inside – and he agrees.

When he arrives he finds out he’s been double-crossed, or so it seems. Warden Hobbes (Jim Caviezel) appears to know nothing of his undercover role, and all means of him contacting his own people on the outside have been removed. Oh dear. He tries to bail out but his bail-out code is not recognised in this prison; it is as if he has asked to ‘sign the sorry book’. Mr Hobbes instead seems particularly intent on making his stay an unpleasant one. Oh dear.

Hobbes quaintly refers to the prisoners in his hi-tech prison as the ‘assets’; people pay big money to have them kidnapped and lodged in his ultra-modern secret prison. But just who are these people who pay big money for this service? Drug cartels wanting to be rid of rivals, it seems, and governments not wanting pesky terrorists and others causing trouble. So, have ruthless drug cartels and secret service agencies gone soft all of a sudden? Why would they not just bump these people off themselves, and save on the huge annual fee to Mr Hobbes? They used not to be so squeamish. And does Mr Hobbes ever release these people? One presumes not; otherwise the assets might exact vengeance on those who had them put away, which sort of defeats the purpose of incapacitating them for years in prison. Fortunately Breslin doesn’t waste time seeking answers to these sorts of questions, but gets to work planning how to escape.

On his first day associating with the other prisoners he meets Emil Rottmayer (Schwarzenegger) who offers him some protection and assistance. Breslin is initially offhand, but then puts his complete trust in his new ally… just a little too readily. They conspire together, even spend time in the isolation cells (where they are subjected to disorienting, dehydrating bright lights) together.

Hobbes meanwhile twigs that the prisoner he knows as Anthony Portos is in fact Breslin. Why at that point he allows Breslin the freedom to mix with others, rather than shackle him and permanently confine him to a concrete and steel cell, is another mystery. Breslin manages in almost no time to break out of a super-secure isolation cell and discover the prison’s location; the rest is as predictable as any action movie that Stallone and Schwarzenegger appeared in three decades ago. Or since.

Escape Plan has been pretty roundly panned by critics… a little unfairly, I think. Not that I think it’s a good film; it’s simply no more dull, or any less credible, or any less two-dimensional than just about every other action movie I’ve ever seen. 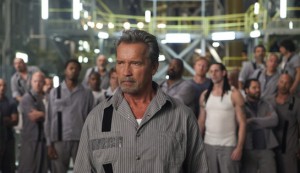 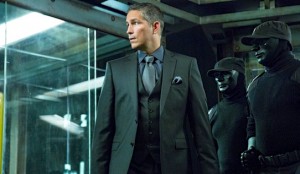