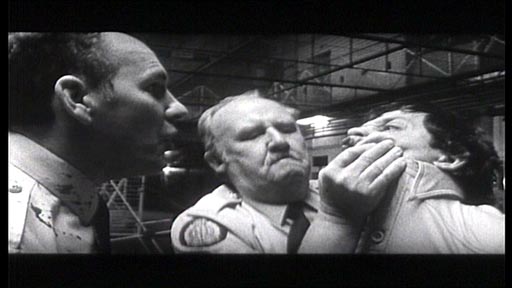 A confronting black-and-white film version of the 1977 play by Ray Mooney, which purports to depict the struggle of Christopher Dale Flannery in ‘H’ Division, Pentridge, and his campaign which resulted in the Jenkinson Inquiry in 1972. Mooney, an ex-‘H’ Division prisoner himself, should know what he’s talking about, but one suspects that he also uses just a touch of artistic licence.

Much of the film is shot in the old Geelong Gaol and (apart from one or two shoddy labour yard sets) has an authentic feel.  David Field (who seems to be in every Australian prison movie ever made) stars as Dale, the character based on Flannery, who gets sent to the slot for assaulting an officer in the remand yards.  His initiation by officers is brutal (including him being raped by a baton) and in order to get him to conform and submit, the beatings don’t stop; he even gets punched in the stomach straight after an appendix operation.  The mind games are similarly unrelenting, and in the end Dale plays some of his own, resigning from the human race and gaining the support of all the other inmates (including a character based on Stan Taylor) to join him in protests to ‘Stop the Bash!’  The movie wants you to believe that Flannery’s indomitable spirit regains his self-worth and wins a Board of Inquiry; in real life, Flannery might not have played quite such a crucial single-handed role.  Even as a film, it doesn’t quite work.  There are scenes which are lifted clumsily from the stage play, the violence is so unremitting that its impact is diminished, and the officers (including the excellent Bill Hunter as Berriman) are uniformly one dimensional caricatures.

There were of course beatings in ‘H’ Division, but the film is at its best when it shows the testing of the prisoners’ mental strength by officers and each other – and in depicting the noisy in-cell protests as Dale ups the ante.

One Response to “Everynight… everynight (1994, Australia)”