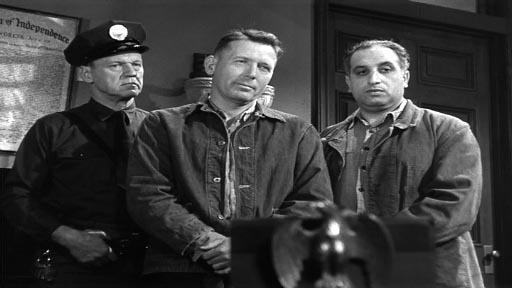 You could be forgiven for thinking that this film has something to do with Alcatraz. Sadly, if you are looking for Alcatraz action, you’ll be bitterly disappointed – Alcatraz is as incidental to Experiment Alcatraz as… well, Alcatraz is to the true story of Robert Stroud, the Birdman of Alcatraz.

It sounds promising: five Alcatraz convicts agree to be human guinea pigs for an experimental blood disease treatment. It all goes horribly wrong when one of the prisoners, Barry Morgan (Robert Shayne) kills his best friend, Eddie Ganz (Sam Scar) soon after being injected with a ‘harmless metallic salt’ and exposed to radiation. The authorities put a swift end to the dangerous ‘secret ray’ trial.

But this doesn’t sit well with Dr Ross Williams (John Howard), the thwarted researcher behind the trial. He teams up with disgraced nurse Lt Joan McKenna (Joan Dixon), who dropped the scissors with which Morgan killed Ganz, and they set out trying to prove that it wasn’t the radiation that turned Morgan into a crazed killer, but that he had a motive for killing his ‘best friend’.

This gets Dr Williams into a bit of trouble. All the convict guinea pigs (including Morgan) have had their sentences commuted, as promised by the Warden, and the newly-released Morgan and his cronies have Williams beaten up a couple of times for being too nosy. But Williams is undeterred – he is too keen to save the lives of all those suffering the rare-but-always-fatal blood ailment. And leukemia sufferers, too. And Lt McKenna’s stricken brother.

The doctor-nurse combination proves adept at solving not just medical mysteries, and when Dr Williams’ medical colleagues rally around him Morgan is soon exposed for the rotter that he is. All in 57 minutes.

We get to see none of Alcatraz, really. The prisoners are promptly taken from Alcatraz to a military hospital to get their radioactive isotope treatment, and the killing happens in the hospital, too. All we see of the jail is the Warden’s office as he sends them off, and again when the doctor-turned-detective Williams and his beautiful sidekick interview prisoner Max Henry (Frank Cady) about the Morgan-Ganz friendship and stumble upon a vital clue.

As a simple detective story, it’s quick and unpretentious. As a prison story, it’s nowhere. 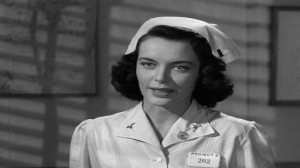 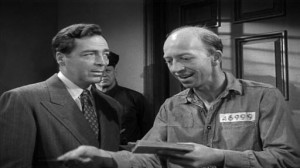