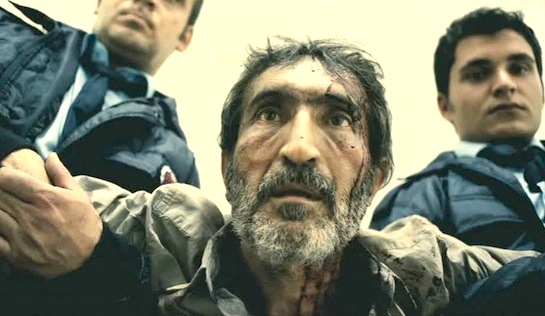 At times the F Tipi Film resembles the many films about IRA prisoners in The Maze; the hunger strikes, the solidarity of the prisoners, their determination to communicate with each other, and the sadness of the families supporting them outside. But these prisoners are not bound by a common political ideology; they are bound by a common opposition to Turkey’s ‘F-Type’ prisons, of which solitary confinement is a feature.

I knew nothing of the F-Type protests, I am ashamed to admit, and the extraordinary toll they took on the protesters. Although the regime would appear to have had its genesis in the late 1980s, the F-Types really came into focus in December 2000, when in Operation ‘Return to Life’ 8,335 soldiers were deployed to transfer prisoners from traditional dormitory-style accommodation in various Turkish prisons to several new F-Types. 20,000 rounds of ammunition were fired and 28 prisoners died in the exercise, hundreds were injured, and 524 survivors were relocated into the F-Types.

The F-Types (of which there are now 13) have been used for organised crime figures, terrorists, political prisoners and those serving aggravated life sentences. They contain mainly single cells (unusual up to that point in Turkey, it seems), some three-out cells, and involve very limited time associating with other prisoners, and eligibility for a visit no more than every 15 days and a phone call once a fortnight.

The film is dedicated to the 122 ‘revolutionaries’ (both in and outside prison) who lost their lives in the protests. This figure includes the ‘Return to Life’ martyrs, 61 hunger strikers (13 of whom died after continuing their fasts after release), 7 hunger-striking relatives and 14 self-immolators. Of those who stopped their fasting, many have have been left with serious ongoing medical concerns, such as Wernicke-Korsakoff syndrome.

The film is made up of nine stories from the protests, each independently directed, and each based around a particular hücre (cell). The first is that of Çi?dem (Gizem Soysaldi), who was forcibly fed after months of fasting, but who has lost her memory and needs to refer to handwritten notes to tell her where she is and how to get through the daily routine.

Another prisoner, known as ‘Detergent’ Orhan (Sacit Akel) due to his pathological cleanliness, finds a cockroach in one of the many messages thrown between exercise yards, and befriends it – if by bonding with an insect you befriend it. The prison guards see his attachment to the cockroach and immediately send in the pest exterminators. An artistic young woman, Sirma (Elif Can Pirhasan) makes a musical instrument from items in her cell; the guards hear her playing it and immediately break it into pieces. All that is important is destroyed.

The prisoners respond to this ‘white’ torture in different ways. One, when he is not head-butting the walls, paints the soles of his feet and puts colourful footprints up and down the walls. He is punished; the white walls of the cells and the yards must remain pristine. His two cellmates brew up new dyes and help him put footprints on the ceiling as well. Another, hunger-striker Muharrem (Firat Tani?), tries in vain to explain the torture of isolation to three visiting human rights apologists who seem concerned, but are more intent on dissuading him from killing himself. They fail.

But for me the most powerful and distressing of the stories is that of an elderly woman, Hayriye Ersoy (Hayriye Ana), who attends the prison to visit her son, Hasan, and is required to undergo a strip search to do so. She is torn between the desire to see her son and her unease and sense of violation, which render her almost unable to function; on the way home, she whimpers quietly to herself, still shocked and humiliated and shaken.

It is a fascinating film, or rather, a film which tries to shine a light on a harsh regime and a fascinating protest. The cells seem to be spacious, well appointed and clean – and the reports I’ve seen do nothing to suggest that this is a misrepresentation. But alongside this, there is brutality in the prisoners’ treatment, and a detached harshness in the guards’ attitudes; only one guard, who is given no respect by his peers, shows much humanity towards those they are looking after. When ‘Detergent’ takes his own life after the exterminators have been and gone and amidst the clamour of noisy protests from other cells, the prison Director quickly moves to absolve his administration of any responsibility. “It has nothing to do with us,” he says. “They are already depressive and suicidal.”

Are such conditions so unusual world-wide? The impacts of long-term isolation are well documented, but prisoners in few countries, I would think, would go to such lengths, or garner such support from sections of the community in their pursuit of justice, despite being subject to similar regimes. Near the end of the movie, one older prisoner, Veli (Hüsnü Yildiz), receives a message thrown over the wall which translates simply as ‘We love you, comrade’ – and he is immediately buoyed; the solidarity of the ‘Fasting Resistance fighters’ is immeasurably strong.

The film itself is not so special; the individual stories are somewhat disjointed, connected largely by place, the same rectangle of sky that can be seen from the yards, the message-bearing missiles being thrown from one yard into another, the realisation that a political journalist in one story and a woman in another are husband and wife… and a common cause. But both the cause and the fight are certainly worth documenting.