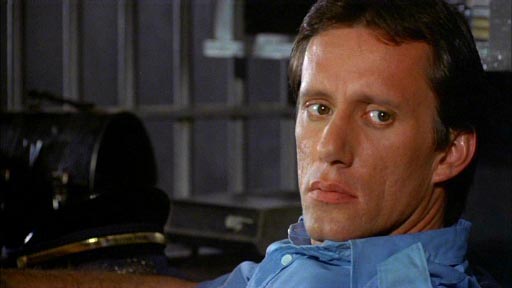 Frank ‘Fast-Walking’ Miniver (James Woods) is a bent, dissolute, dope-smoking, work-avoiding guard who regards his job and his bosses with contempt. In his spare time he helps run a couple of whores out of his cousin’s general store, and just about everything he does is corrupt in one or more senses of the word. But in this grimy, dispiriting film, that doesn’t set him much apart from anyone else.

Fast-Walking’s cousin Wasco, (a miscast Tim McIntire), has just landed in jail again and has already picked up a trustee’s position; he has handy local connections. Wasco is not at all defeated by prison; rather, it provides the theatre in which he does his very best work, a bit like it does for Bronson, a generation later (and in a different way).  Wasco has a grand vision, and possesses the nous to put his plans into action. He takes over the prison drug distribution… in fact, if it’s drugs, money, murder, race exploitation or any other racket in the prison, Wasco is soon behind it – helped by his sister on the outside, some key guards on the inside, and his beautiful girl, Moke (Kay Lenz), who Fast-Walking sleazes on to in the time-honoured way.

Enter William Galliot (Robert Hooks), an African-American civil rights activist, whose arrival in the jail causes a minor commotion. Fast-Walking soon gets put in a difficult position; cousin Wasco has a commercial interest in him being killed, and Galliot and his people on the outside put $50,000 on the table to arrange his escape. Both plans rely on Fast-Walking, corruptible and a crack shot. These are the sorts of dilemmas that correctional officers often face.

It’s not uplifting. It retains one’s interest through its twists and turns and because, against one’s better judgment, one vaguely sides with the reprobate Fast-Walking over all the other reprobates. Perhaps Fast-Walking’s casual seediness is ultimately more palatable than the more organised view of the corrupt world that which Wasco espouses. 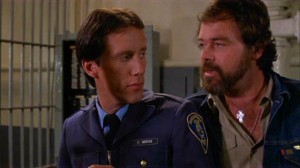 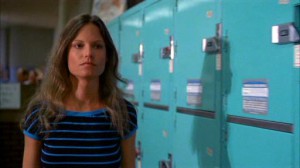 Fast-Walking was shot, in part, on location at the Old Montana Territorial Prison in Deer Lodge, and it provides a terrific backdrop to the action. The prison’s operations were contracted out in 1890 (does this make it one of the earliest private prisons?) and it closed in 1979.