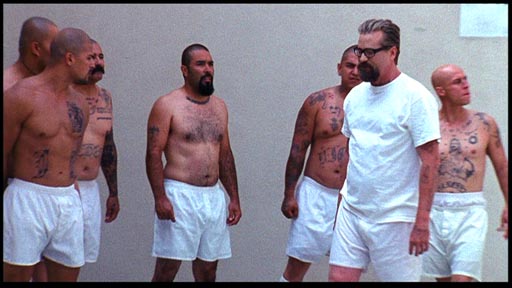 You’ve got to wonder why someone would still feel the need to make a movie like this, as if “Let’s drop an ordinary decent guy and a sadistic guard into an episode of America’s Hardest Prisons” has never been done before. Or warrants a re-run.

Loving family man, Wade Porter (Stephen Dorff), has a beautiful fiancée, a loving son, his business is prospering… and then he gives an intruder a whack over the head with a baseball bat, the bloke dies, and Wade and finds himself with some jail time for manslaughter. And if that’s not unlucky enough, while he’s en route to prison in the van, one of his fellow inmates gets stabbed, and he is left holding the shiv and finds himself in the Security Housing Unit for Very Bad People.

The SHU is ruled by another loving and benign-looking father, Lt Bill Jackson (Harold Perrineau), who amuses himself by putting the same mix of hard-core, desperate men in the same small yard every day and letting them half kill each other (before reluctantly intervening by shooting the combatants with rubber – and sometimes real – bullets). Wade gets a new cellmate, John Smith (Val Kilmer), a philosophising mass murderer with a formidable reputation, and he learns from him how to survive in the dog-eat-dog environment – by becoming more violent and brutal, essentially. By this stage he is unrecognisable from the bloke he was before; he shaves his head to fit into the Aryan group, and of course can’t talk to his fiancée about what’s going on for him. She is struggling financially and it all gets too tough for her, particularly after he is given more jail time for being an accessory after the fact when the stabee in the van dies, and she bails. It’s then that in desperation he hatches a plan to save himself and his relationship.. and fight against the corrupt system at the same time. It all ends as one might expect.

You might say that it’s well acted and the impressively tattooed gang members are all pretty convincing.. but the film trades so transparently on our sympathies for the hapless Porter, and relies so heavily on the idea that this one hateful, rogue officer with some heavy baggage can allow dangerous men bash each other to a pulp every day for sport – without someone noticing or anyone doing anything about it – that it all seems a bit artificial and predictable. 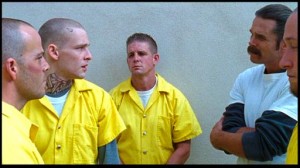