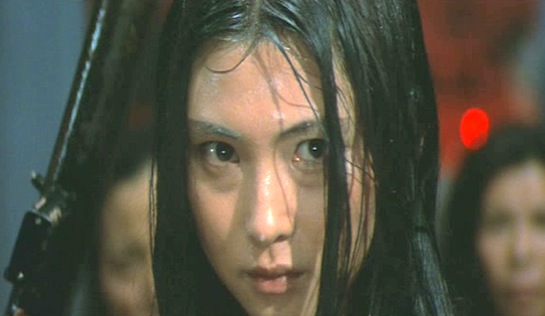 Normally I don’t include exploitation films, but this is something of a cult favourite, and supposedly different. “Smarter and more deeply meaningful than many of its European and American … counterparts” says one reviewer. Another, the trusted ‘Prison Flicks’ website, claims that, “The core of the movie is the political critique of post-war Japan, and its attempts to hide rather than reform its corrupt political and economic structure. The movie provides an image of a diseased polity, and Matsu is not so much a heroine as she is a force of nature attacking the old order.”  Well, I’m not so sure.

The story is simple enough: Matsu (Meiko Kaji) is a beautiful young innocent who falls in love with a corrupt narcotics cop, Sugimi, who uses her to infiltrate a yakuza drug operation. When she is exposed, she is gang-raped by the yakuza and then discarded by Sugimi, her purpose served. She is later arrested while trying to kill him, is jailed without uttering a word against either Sugimi or his drug lord mates at her trial, and then escapes from prison. Back in jail she is hog-tied and subjected to torture by over-the-top guards and spiteful trustees, while the other prisoners get reduced food rations for the escape, and have to perform manual labour ‘til they drop because of Matsu’s stoic refusal to confess. To what, one might ask? Rather than having any sympathy for her plight and perhaps thinking that she ought not be tortured by male guards, the other prisoners turn on her also. Sugimi, fearing that Matsu still has too much information on him, enlists another prisoner to kill her. This woman doesn’t quite finish the job; Matsu escapes again and this time systematically knocks off all those on her list, finishing with Sugimi. The end.

Is it as “thought provoking” as some suggest? Is it that “Sugumi (sic) represents the post-war Japanese power structure, which the movie argues is at its core corrupt and misogynist, build on shady bargains and the oppression of women”? Or is it a simply a tale of a wronged woman wreaking revenge, peppered with gratuitous nudity and WrestleMania tomato-sauce violence, to which it’s very convenient to attach symbolism? The latter, I fear. 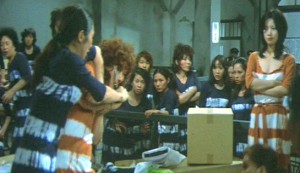 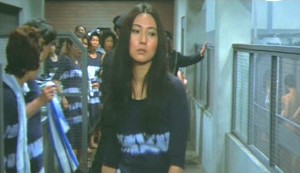