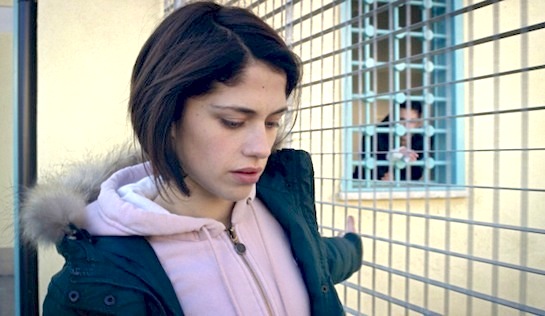 Director Claudio Giovannesi taught at the Casal del Marmo juvenile detention facility in Rome for a number of months in order to get a better appreciation of the centre and its inhabitants. It paid off. This is a finely observed, stripped down, silence-rich portrait of an incarcerated young woman, and of her budding romance with a young man who is held in the male section of the same facility.

The film rides off the compelling performance of Daphne Scoccia as Daphne Bonari, a teenage girl who lives in a group home and has unpleasantly taken to robbing young people of their mobile phones at knifepoint. Her father, Ascanio (Valerio Mastandrea), is just of out jail after serving a long stretch inside; while much loved, he has been of little support to her growing up, and now continues to disappoint as he tries navigate his way through a relationship with a new partner (and her son) and tough parole conditions. There is no mother.

Daphne is full of common (and some less-common) teenage characteristics and contradictions – impulsive, self-centred, headstrong, street-wise yet childlike, tough yet vulnerable – and struggles in jail. She gets off-side with the other girls, casually sets fire to her bedding out of boredom rather than a particular desire to self-harm – and starts tentatively sharing some of her thoughts with Josh (Josciua Algeri), a boy from Milan whom she first meets after he deals with bad news from his girlfriend by punching a wall. Daphne and Josh can see each other from their cell windows, and steal quick conversations when she is in a yard next to the boys’ quarters. They smuggle notes to each other in food trolleys… and get each other through the despair.

When Josh is released and Daphne gets a two-day furlough to attend her father’s new partner’s son’s confirmation, everything is tested: her capacity to blend into her new family, her acceptance of her obligations in relation to her prison term, and her feelings for Josh.

Aside from Scoccia’s performance, the strength of the film lies in its depiction of prison life and the young women and men in the mixed sex detention centre. Algeri and a number of the other actors have themselves been prisoners, and the film was shot at the vacated juvenile detention centre in earthquake-damaged L’Aquila. But it’s more the portrayal of the prisoners and staff that gives the film its authenticity; it lies in the tensions, the awkwardness, the banality of the day-to-day routine, the fights, the deals, the pettiness of some of the guards’ disciplining.

Yet I walked out of the cinema feeling a little empty. Authenticity is not everything; you have to connect. And, sadly, it’s hard to connect too strongly with Daphne, despite her miserable and troubled upbringing, despite her miserable, messy present circumstances, and despite her sullenness and closed-offness being so recognisable. It’s her teenage ingratitude and irresponsibility that leave the strongest impression, I think, even when her capacity to empathise seems to improve.

Then again, emptiness is quite possibly the most appropriate response; there are no quick fixes in such cases and happy endings are rare. A captivating, thought provoking film. 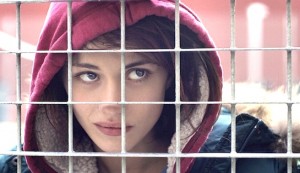 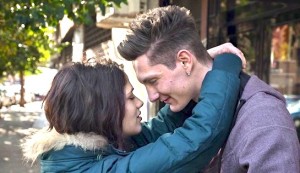