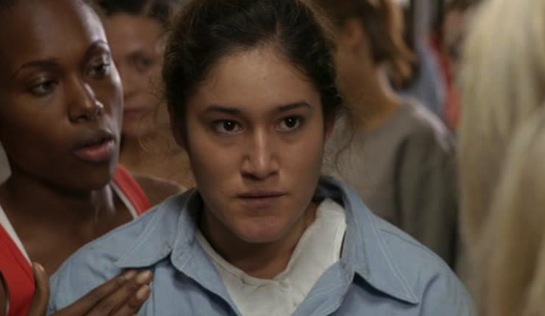 “Nice but preposterous,” was my wife’s judgment after watching this made-for-TV offering. Or maybe it was the other way round. Anyway, she is rarely wrong.

Firelight is unashamedly a feel-good movie which sets out to show that prisoners are capable of redeeming themselves despite setbacks, despite relapses, and despite tough lives. All they need is a little help to steer them down the right path, we’re told.

The case in point is seventeen-year-old Caroline Magabo (Q’orianka Kilcher), caught doing a burglary with her boyfriend and sent to the Rockwood Youth Correctional Facility (RYCF) to set her straight. She is immature, sullen and lacking in self-esteem.

The RYCF is unusual. It seems to be pretty much run by the senior youth counsellor, Dwayne Johnson (‘DJ’ to everyone, and played by Cuba Gooding Jnr) who knows everything about everyone. He has instituted a firefighting team (Crew Nine) which is trained to fight wildfires (it seems that the RYCF is located in that part of Georgia where spot fires are a regular occurrence). The prison is thus effectively divided into two: the orange-clad Crew Nine girls, led by Terry Easle (DeWanda Wise), who are all decent and committed to their own rehabilitation, and the rest, led by the gang-affiliated Pedra (Rebecca Rivera), who quite possibly aren’t.

It’s a predictable journey that Caroline takes – initially pushing good-guys Terry and DJ away, then accepting help from Pedra without realising that she would be indebted to her, and finally, with DJ’s assistance, coming good, joining the Crew Nine girls, and discovering self-worth in the process. Add in a couple of touching stories of parents disconnected from their children by different and sad circumstances, and that just about sums it up.

But can I give you a taste of the film’s ridiculousness? Caroline shows exceptional artistic talent, producing extraordinary portraits of the women and their visitors, but this remains totally unacknowledged by the prison officials; DJ instead pushes her towards a future as a firefighter. Go figure. As for poor DJ, at one stage he is unable to sleep because he is so troubled by this one girl; not a good sign in a counsellor (who must have hundreds of similar cases) to be so invested in one individual, one would think. Then there is degree to which the whole prison seems to be attuned (a little religiously) to Plato’s allegory of the cave; a little unlikely. Or when the Parole Board is not convinced that Terry wouldn’t again act in her own base interests under pressure (she is in jail for a fatal hit-and-run accident), just after she had risked her own safety to go into a dangerous fire situation to save another prisoner – and neither she nor DJ offers this up in her defence. And then the dramatic climax, when Caroline and Terry save a young man from his car which is teetering on the edge of a precipice; an outcome that itself dangles on the edge of sheer absurdity. 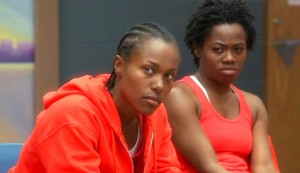 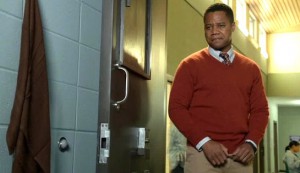