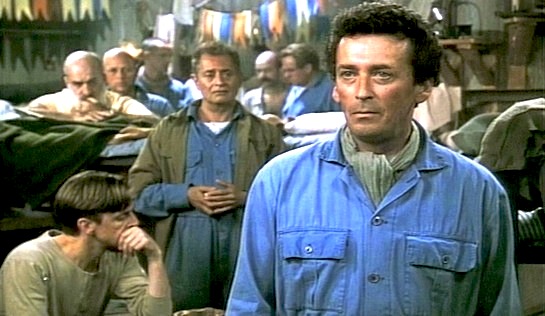 ‘”… A classic” – The New York Times’ – trumpets the blurb on my DVD and my expectations are raised. It’s a long film, three hours (or three hour-long episodes) and midway I’m struggling both with this description and to maintain interest. How could I get it so wrong? I decide to look up the review: “The First Circle is a very sad film. Not because of the austerity of its place and time (a special Soviet prison camp for scientists in the late 1940’s), nor because hopelessness would seem the only rational philosophy under a tyranny as effective as Stalin’s. Rather it’s because the movie is such a wan and ineffectual testament to the novel it is based on, as well as to the life and career of its extraordinary author, Aleksandr I. Solzhenitsyn, the 1970 Nobel Prize-winning Soviet writer.”

“Exactly,” I thought, before realising that it was a review of the 1973 film version, but I can’t find the “classic” review of the 1992 update. The review I can see goes on to refer to it as “an international mess” and to bemoan the “variety of accents”. Snap!

It’s not an easy thing to decide how to portray a bunch of Soviets to an English-speaking audience. Russian actors and English sub-titles? Too authentic. English-speakers all affecting Russian accents? Too homogeneous. Instead, here we have the whole gamut of accents. American accents, plummy British accents, French and Italian speakers, some dubbed; an international mess. Maybe it shouldn’t detract from the story, but I found it extraordinarily distracting. In the midst of the mass of American-sounding prisoners is the debonair Gleb Nershin (English actor Robert Powell), sounding as though he has landed amongst them from a different planet.

Anyway, we take a peek at three days – 24-26 December 1949 – in both the Mavrino minimum-security prison for dissident scientists, and some parts of the surrounding world that put its inhabitants where they are. The scientists are well fed and well looked after, because no scientist wants to work on scientific breakthroughs for the State if they can think only of their unfilled stomachs.

Outside the prison, high ranking Ministry of Foreign Affairs insider Valadine Innokenti (Laurent Malet) makes an anonymous call to the US Embassy, tipping them off about the trafficking of atomic bomb blueprints. His father-in-law is an obscenely wealthy proletarian state prosecutor, and his sister-in-law Clara is a guard at Mavrino who has fallen in love with a prisoner, ‘Ruska’ Rostislav (David Hewlett). The security forces have Innokenti’s call on tape, but it is disguised and they are relying on the Mavrino scientists to develop a voice print analysis machine – which seeks to identify voices by analysing speech patterns – to pinpoint the traitor. That work is given to Lew Rubin (Victor Garber), a Jew loyal to Stalin’s regime, and his best friend and fiercest critic, Nershin, the most outspoken of the prisoners against the regime. The film’s interest is in the intertwining of these stories, none of which are particularly diverting on their own.

The spectre of the ageing Stalin (F Murray Abraham) is felt everywhere. He is depicted variously as a megalomaniac prone to soliloquies (shown musing in the Kremlin at 3.00 am about the bomb that he must have: “Only then will I sleep…”), as a sad old man, as Albert Einstein with pancake makeup on a good hair day, and as quite rational compared with his comical Minister of State Security, General Viktor Abakunov (Christopher Plummer), who most of the time seems to be channelling an unseen cartoon character.

The prison itself seems to be rather jolly for a Soviet prison. There is bunting in the dormitory, and cake, home brew (the last of which, I concede, probably didn’t have the endorsement of the authorities), and the opportunity to work at something which extends you. The prisoners live quite comfortably… if you think that you can live comfortably with just one visit once a year (held outside the prison; no touching of wives and no discussion about prison or politics allowed) and the threat of being sent to the Siberian camps if you further annoy the regime. Informers a treated with some disdain but are left unharmed. Two relationships between female guards and prisoners are treated sympathetically. Critically, in just about every respect being locked up with a group of your dissident mathematician or scientist peers is preferable, I suspect, to being locked up with your common or garden criminal. Except that your ordinary thieving or thuggish cellmate is less likely to debunk the whole of your life’s work, or calculate the exact probability of you becoming blind from the paint thinner home brew you have stupidly just drunk.

Like The New York Times’ assessment of the 1973 First Circle, I found this version a wan and ineffectual movie, with too few of the oppressed characters people you care much about. I don’t mean to gloss over the depictions of the Stalinist regime’s brutality (the belting handed out to Ruska the informer when he starts exposing other informers, for example, or the authorities’ indifference to imprisoning good people and even people they know to be innocent), but if the film is to be believed the regime was propped up by layers of puffed up and incompetent buffoons; caricatures of men. It is ultimately unsatisfying.

My favourite part, though, was reflecting on the complexity of a voice print analysis machine which has to try to find matches in individuals’ speech patterns when those individuals’ voices have been dubbed. Tricky, huh? 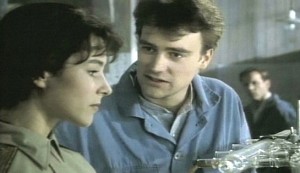 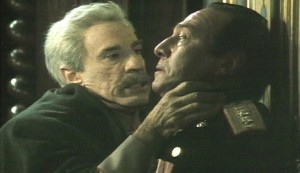 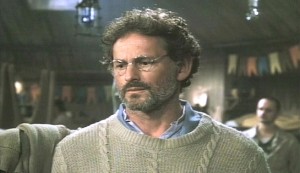 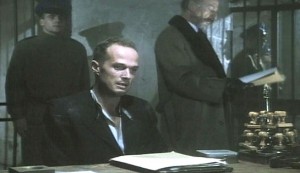