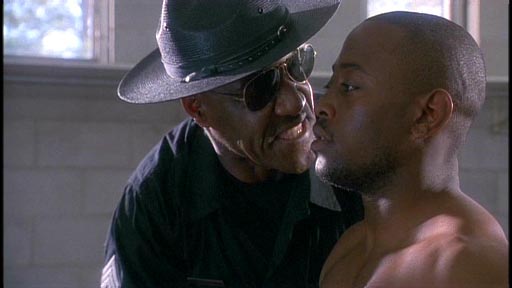 It’s bit surprising that there aren’t more prison boot camp movies, given the potential (brutally exploited in movies like Full Metal Jacket) to show tough men being bullied, abused and humiliated. That potential really is within easy grasp of the prison movie genre.

It is the territory of First Time Felon. The film is based on the real life story of Greg Yance (played here by an impassive Omar Epps), successful drug dealer and high-ranking member of the Vice Lords gang in Chicago. He gets pinched in possession of a largish quantity of heroin, and is sent down for 5 years – but as he is a ‘non-violent first-time felon’ he is given the option of doing a 120-day boot camp program (and then probation) instead. Not surprisingly, he opts for the boot camp.

The camp, euphemistically known as the ‘Impact Incarceration Program’, is all that you would expect; correctional officers getting into the faces of the inmates, indiscriminate abuse, tough discipline, arbitrary punishments and no tolerance for individuality or questioning of the approach. Leading the assault by the officers is Sergeant Calhoun (Delroy Lindo), who is on a personal mission to remind all the African American inmates that it is they who oppress their brothers by selling them drugs and condemning the black community to lives of disadvantage, crime and under-achievement, and that they cannot claim disadvantage and oppression as an excuse. Sometimes it gets too personal for Calhoun and he over-exuberantly over-steps the mark.

Much of Yance’s story is pretty standard prison movie fare: he is exposed to violence first-hand in the jail, then at the camp is paired with rival gang member Tyrone and is forced to work with him. A team from the camp is sent to help the small Illinois town of Niota during the Mississippi floods of 1993, and they win the respect and gratitude of the local townsfolk. On release, though, he finds the going tough; he steadfastly refuses to get back into his former criminal ways but receives knock-back after knock-back when he seeks legitimate work. He hits rock bottom; his friend Pookie is gunned down and dies in his arms, he starts drinking to excess and becomes suicidal. One hopes, perversely, that the film will surprise and not end happily, but those hopes are never going to be realised in a film such as this.

What does it tell us? It suggests that boot camps are cheaper than imprisoning men for long periods and have greater success rates; some data would suggest otherwise. It tries to tell African American gang members that they are hurting their own. It tells the wider community that it’s tough going once you’ve been in jail, and that its attitude toward ex-offenders might lead to people with less resolve than Yance falling back into criminality through desperation. And it says that if only the Mississippi could breach its banks more often, the impact on criminality could be profound. 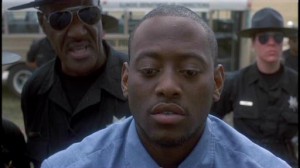 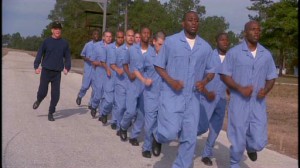