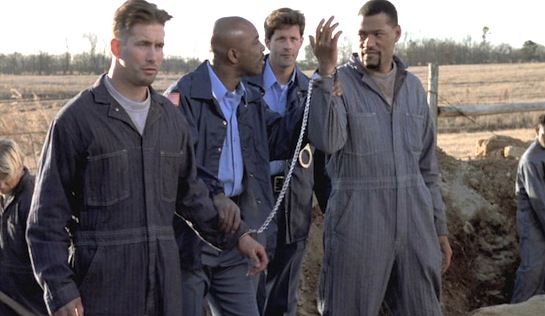 I tried to recall how many films I’d seen where prisoners escape while chained to each other. I think this one made seven. So it’s not a novel concept. Frankly, I’d be more curious to see a film featuring one of those chain gangs where the prisoners are chained together to their bunks at night, and see how they manage after a dodgy stew for dinner, or deal with several enlarged prostates.

First-timer Luke Dodge (Stephen Baldwin) is halfway through an 18-month sentence for stealing $5 million by hacking into businesses’ computers. He doesn’t realise it, but he’s suddenly a person in high demand. It seems that apart from the theft for which he is serving time, he ripped off a further $25 million from a firm belonging to a Cuban mafia boss. The Attorney-General’s Department thinks that he might still have a disk of accounting information from which a successful prosecution of that Cuban crime boss Frank Mantajano might be mounted, and Mantajano is just as keen to retrieve the disk, for obvious reasons.

Dodge is put to work on an Atlanta chain gang, and after pre-emptively whacking a predatory prisoner with a shovel, is chained to a third, tougher prisoner, Charles Piper (Laurence Fishburne). If there weren’t tension between the two chained prisoners – à la The Defiant Ones (1958) or The Walls of Abashiri Prison (1965), to name just two – you wouldn’t be watching a prison movie. They fight. But when the whackee steals a guard’s gun and starts shooting, Piper drags Dodge from the chaos and ‘fleds’. ‘Fled’, you see, is the film’s very own grammatical conjugation, as in, “We gotta fled.”

Very soon into the film it therefore ceases to become a chain gang movie (or an escapees-on-the-run movie) and becomes your standard action thriller, with the good guys and the bad guys both wanting Dodge and his disk, and Dodge and Piper teaming up despite their initial dislike of each other. It features a few tricky twists and turns, and even a bit of romance with Piper becoming attached to an extremely accommodating ex-wife of a cop, Cora (Salma Hayek), whose car is hijacked by the two escapees and who finishes up helping them do all sorts of stuff.

It’s pretty cheesy (and transparently derivative) fare, with a bit of humour, some traditional rivalry between the US Marshal leading the pursuit and the local detective, Matthew ‘Gib’ Gibson (Will Patton), fast cars, fast bikes, and a stereotypically mean-looking assassin, Santiago (Victor Rivers). And of course it has a body count which rises steadily, but not nearly as quickly as you might expect from trained assassins and federal agents as they shoot thousands of rounds at each other with staggering waywardness.