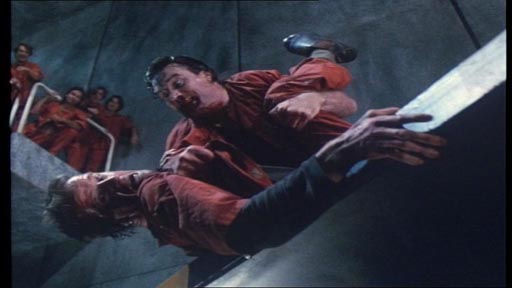 I’ve broken my own rules here and included a futuristic prison movie. Partly because I happened to chance upon it for $6.98 in my local DVD store, and partly because when prison operators talk of correctional innovation, it remains such a solid reference point.

John Brennick (Christopher Lambert) and his wife Karen (Loryn Locklin) are detained at a US border crossing in 2017 or thereabouts. She is discovered to be pregnant with a second child. The law says you can only have one. The fact that they lost their first child doesn’t count, it seems.

John gets 31 years jail, which seems fair. He is sent to a privately operated maximum-security prison comprising 33 levels under the ground, with prison labour being used to excavate deeper and deeper to add more levels. He thinks Karen has escaped at the border. He’s wrong; she’s in the same prison, a few levels above.

The prison is controlled by a massive computer named Zed, and the Prison Director Poe (Kurtwood Smith). It has several spectacular prisoner-control mechanisms, the king of which is the intestinator, an unpleasant little device that prisoners are forcibly required to swallow upon reception. Cross a yellow line, and the intestinator inflicts pain. Cross a red line, and it explodes. Coupled with the computer’s very nasty capacity to read thoughts and dreams, it is very effective in quelling unruly thoughts and behaviours; think the wrong thing, and the instestinator can be activated, do the wrong thing and you can be deactivated. The prison’s private operator is a big supporter of aversion therapy.

Brennick, who used to be a decorated Captain in the army, is intent on escaping… but it’s a bit tricky when there are those red lines that can’t be crossed. It’s also a bit tricky when you’re not one who can simply stand by and watch injustice; as a result he gets into strife with both other prisoners and Director Poe – all of which underline John’s courage, his leadership and his ethical base. Can he escape? Can he save his wife and unborn child? Can he retrieve his wife and unborn child from Poe, who has blackmailed Karen into living with him by continuing to ‘mind-wipe’ her husband until she relented?

In some respects it’s just another action flick, albeit a goodish one. But it deftly illustrates what true prison innovation can be. Is a high wall necessary to make a prison secure? The intestinator suggests not. Not that I’m advocating intestinators. Or moats, or Wedlock (1991) collars. But it would be silly to suggest that in 25 years we will be relying on the sorts of physical barriers we have now.

Prisons worldwide have had punishment cells for hundreds of years. Fortress’s punishment ‘cells’ consist of a small ring of laser-type beams in which the prisoner must stand, without touching the beam. Awful and inhumane, obviously… but it doesn’t shy away from the possibility of different technological solutions to the most traditional of prison problems.

It’s well worth a look. Nearly two decades on, its glimpse into the future remains fresh and thought provoking.