Who could forget the original Fortress (1992) and its magnificent intestinator? There’s nothing in this sequel to match it, sadly, although each prisoner does receive a new behaviour-modifying neural implant that also expropriates the optic nerve and allows ZED, the prison’s all-knowing computer, to relay each prisoner’s vision onto staff-monitored screens. Which is sort of handy.

The first high-security Fortress, you might recall, was underground. John Brennick (Christopher Lambert) was imprisoned there for the crime of impregnating his wife Karen twice, but he managed to escape, causing massive embarrassment (and some expense, as he also destroyed the prison) to the Men-Tel Corporation, the private firm which ran it. Here, Men-Tel finally tracks down Brennick and his family at their forest hideout after 7 or 8 years, captures him and takes him to its new super-duper high-security fortress… in space, where all the prisoners’ death sentences have been commuted until the Men-Tel Corporation determines otherwise.

Oddly, several prisoners expresses surprise at where they have finished up after watching live vision of a fellow inmate being pushed out of an airlock for attacking a staff member, and floating away; maybe the prison’s reputation had not preceded their arrival, or they might have slept through the entire 26,000-mile journey to get there. “Oh, my God,” gasps Elena. “What the Hell’s that?” asks Marcus, looking at the space vision. “We’re in space,” says Elena, disbelievingly. Yet these are two of the people whom Brennick later relies on to assist him get out.

It’s also a little odd that we seem to have skipped quite a few decades from the first Fortress and now find ourselves in the middle of the 21st Century. And it’s of course disappointing that the intestinator is no longer de rigueur.

Anyhow, Brennick naturally wants to escape again to be with his wife and son, because he is a good, decent person. So decent (and optimistic about his chances of effecting an escape) that he passes up the offer of a fling with the aforementioned Elena Rivera (Liz May Brice), a colleague from his old armed forces days… but that doesn’t stop him from enlisting her help, and that, too, of Russian double-agent Max Polk (Nick Brimble) and electronics whiz Marcus Jackson (Anthony C Hall).

Of course, if this were to play out in real life the Men-Tel Corporation would gain ample corporate satisfaction by simply dispatching Brennick once they found him, but because it’s a movie they want to keep him alive and torture him with vision of them closing in on his wife and child. This is invariably a bad move; we know that.

Still, the action-flick path to an escape is never easy. Brennick must withstand one foiled escape bid and consequent time in ‘The Box’ (a small dome exposed to the sun with a 24-hour life expectancy; Brennick cooks for more than 31 but is pulled out so that he might continue to pose a threat), a fiery attack from another disgruntled prisoner in circumstances set up by staff (again I ask, if they want him dead, then why not just kill him?), a run-in with the chess-playing Russian mafia, and a meteor shower, just to name a few impediments along the way.

He also has to overcome the malicious British Superintendent, Peter Teller (Patrick Malahide), who in a distracting, pointless sub-plot is keen to turn the prison into a power station and have the prisoners provide the labour, and the heartless guard Sato (Yuji Okumoto), who is one of that strange movie breed who prefer hand-to-hand combat when mortally challenged, even when they have access to lethal weapons.

The film also boasts Pam Grier in the role of the President of Men-Tel, co-ed showers, a classic mess-hall fight, and a prisoner rendered a simpleton by an implant mishap who has a pet cockroach and gets to play an important part in Brennick’s plan. Oh, and an awkward running joke about women spaceship drivers.

As with all you-never-get-out-of-here-alive jails in space, I struggle with the idea that any Government which is so comfortable with the breaches of human rights that transportation to a space prison represents (and one which turns a blind eye to a private corporation enforcing the death penalty as it chooses), is unconcerned at the cost of maintaining a space prison and at the same time too sensitive to public opinion to carry out the death penalties themselves. Or to contract the service out on Earth.

Besides, from what I know from these the movies, space prisons always have something go catastrophically wrong; they just have to be a poor social infrastructure investment. 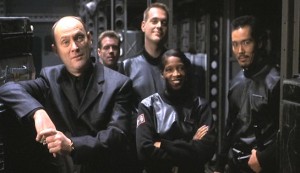 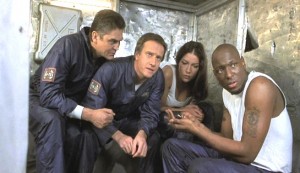