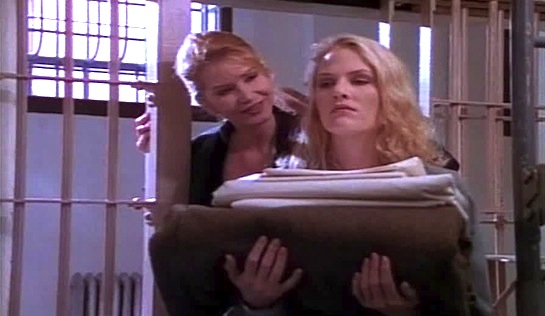 You know to lower your expectations when movies are straight-to-video, as this one is. But no matter how low your expectations, this film, also known as ‘Caged Fear‘, will in all probability fall below them.

Tara McCormick (Wendy Schumacher) is unhappy with a tainted ‘not guilty’ verdict against LA mobster Tommy Stompanato (Jay Richardson), who had been accused of arranging the murder of his ex-girlfriend (and Tara’s sister).  Although she has an LAPD and SWAT background, she empties six rounds into the gangster at close range in the courtroom and somehow fails to kill him.

In prison, she has two cellmates, one of whom she beats up within minutes, and the other Josie Williams (Shauna O’Brien), who has been convicted of killing her abusive husband. Tara is visited by a spook, James O’Keefe (Tim Abell), who claims to be a federal agent and offers her a quick release and pardon she will do some work for his employer. After she is set up and attacked on her first day, Tara agrees – provided that Josie (whom she has just met) is given the same deal.

She is taken to a safe house by O’Keefe, but is soon bored, insists on being taken out for dinner, gets into a bar fight, escapes, gets run down by Stompanato’s men who have been watching the house, does some horizontal folk-dancing with O’Keefe, and then is forced to kill two of the gangster’s crew who drive their car into her bedroom. She finds out that Stompanato and his offsider, Ryker (Ross Hagen), have kidnapped Josie from her prison cell, killing a couple of guards in the process, and heads off to Stompanato’s mansion in a fugitive rage – which is fine, because it happens to be the very task she was taken from prison to do.

She breaks into the mansion grounds and lumbers around shooting all Stompanato’s bodyguards. Despite being unable to kill their boss from virtually point blank range, she manages to kill all of them with single shots after they incomprehensibly spray all their shots at her with their automatic weapons. She tracks down and kills Stompanato, rescues Josie, discovers that O’Keefe was really working for Ryker (who wanted to take over Stompanato’s business), kills both of them (well, Josie kills O’Keefe)… and then they both kill Stompanato’s trial lawyer as well for good measure. Their final tally: 14 (Tara 12, Josie 1, shared 1).

It is sheer preposterousness from whoa to go; hammy, poorly scripted, poorly acted, and with woeful prison scenes to boot. The prison bits start with Helga (Toni Naples), the Chief Guard doing a cavity search on Tara herself – in a darkened room, dressed in a singlet and smoking a cigar. And it doesn’t get much better. In order to remove the prisoner with whom Tara has just fought in her cell, a guard goes into the cell waving a cocked shotgun around as if it were a twirling baton.

My favourite exchange occurs after Helga, who is corruptly in league with Tommy’s men, orchestrates the release of all the women from their cells after lock-up and lights out, so that a number of women can attack Tara on her first night. Tara gets much the better of the principal (Stompanato-connected) would-be assailant, and both of her two henchwomen. The Chief Guard is not happy with the outcome, and upbraids Tara: “Not even a day and you’ve damn near killed the most popular girls on the cellblock!” which is really quite unfair as Tara hadn’t been told that the people trying to harm her were popular.

Schumacher is as unconvincing as a former SWAT team leader as the film is as an action thriller. Where you expect her to be agile and stealthy and show some assuredness in handling weapons, she is none of those; struggling to descend a ladder, awkwardly climbing over things and clumsily holstering her firearm. Oh for a stunt double! Richardson is just as unconvincing as a crime boss, conveying a nice smugness but lacking any real menace.

This is a stinker, and well left alone. 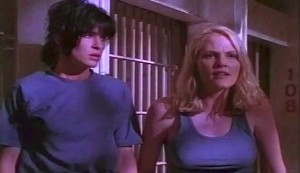 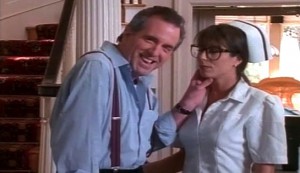