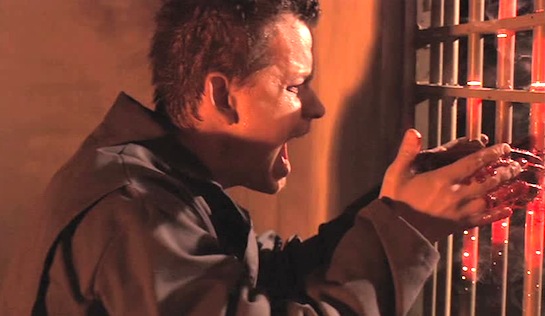 Why does a supernatural being, capable of passing through walls and furiously intent on avenging past horrors, wait until someone opens up its resting place before wreaking havoc on the world?  You won’t find the answer here.

When a Blackgate Prison guard suicides for no apparent reason, Detective Michael Turner (Michael Paré) decides to investigate, curious as to how the guard could lose two fingers at work and go home at the end of the day without seeking medical attention… before killing himself. Then a prisoner at the same jail seemingly boils himself to death in his cell, and it becomes a different sort of investigation.

By then we’ve already been warmed up to the spookiness that is to come. Before the credits are even over we’ve been informed that the site of the Nashville prison has a cursed history with lots of unexplained, big-time tragedies dating back to the first colonization of Cherokee land; the last of which, in 1956, was the murder of Warden Ephrem White and the strange disappearance of his 10-year-old daughter Lucille.

In preparation for 300 new prisoners being shipped in from Alabama, Blackgate’s current Warden has ordered the reopening of the South Wing, which has been bricked up for the 50 years since Warden White’s death and the fire that followed. Everyone who dares to enter the old cellblock and, more particularly, the furnace, seems to come to a gruesome death after a confrontation with an angry paranormal being or two, one of whom bears a ghastly likeness to a charred 10-year-old girl.

Det Turner teams up with prison psychiatrist Dr Ashley Carter (Jennifer McShane), whom he beds after she offers him sympathy over the murders of his wife and daughter, killed four years earlier in revenge for him locking up the killer’s brothers. She also offers him her hunch that guard Frank Miller (Tom Sizemore), who Turner got sacked for being a rogue cop, is dealing the drugs which she is sure are leading these men to kill themselves, but this doesn’t excite the same sort of passion. Sexual tension relieved, they seek to solve the mystery of the bizarre furnace-checkers’ deaths.

It’s a film that seems very uncertain of itself; so much so that it doubles up on everything in case the viewer is slow on the uptake. Two severed fingers. Turner has two possible love interests; and both doctors: Dr Carter and a sweet coronial pathologist. There are two murderous ghosts, both supernaturally capable of turning up anywhere to terrify anyone who has disturbed their habitat, but who have been either strangely content over the previous 50 years, or more oddly incapable of getting out of the furnace until the door was opened. And there is a double-barrelled threat to Turner’s person – from both those vengeful ghosts and the corrupt ex-cop Miller, who treats prisoners like dirt, kills them indiscriminately, and yet feels hard done by and wants his old colleague dead.

It’s all a little predictable. But the real star of the show, for me, is the Old Tennessee State Prison (1898 to 1992), a magnificent edifice that plays the part of Blackgate Prison with some panache. A little more panache, sadly, than the rest of the cast. 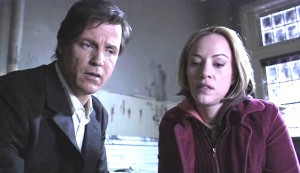 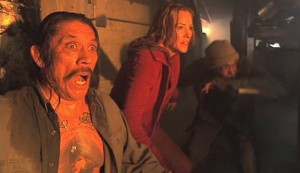