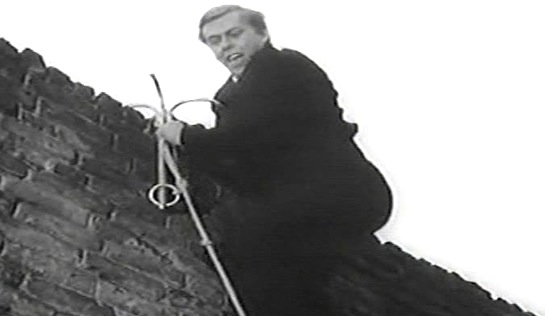 It would be hard to imagine a movie called Gaolbreak with less prison content; we get to see a visit cubicle, the door to the visit cubicles, and the outside of the wall. That’s it.

Instead of the tedium of prison life from which someone wants to escape, we get to see Eddie Wallis (Peter Reynolds) and his mother (Avice Landon*) who run a newsagent’s shop but whose more exciting professional abilities are in safe-cracking and thievery.

When an expensive shipment of jewellery is about to go under the hammer at Barrington’s auction house, Eddie calls his crew together, but his brother Ron (David Gregory) doesn’t show. Ron, the gang’s chief safe-cracker, and his mate, Wally (Robert Fyfe), have just pulled a 6-month stretch in gaol for a stolen car – apprehended on their way from an aborted job. The family decides that the most sensible thing to do is break Ron and Wally out of prison so that Ron can help them do the jewellery job. On a visit, Mrs Wallis tells Ron the time to be in the yard when a rope is to be thrown over the wall. Simple.

It goes exactly to plan… except that Ron has invited another prisoner, the lovesick Len Rogerson (David Kernan) over the wall with them. Len is very worried about his pregnant girlfriend, Carol (Carol White), and although he’s desperate to see her, all three escapees get bundled off to a safe house – or a safe hospital, really – St Vernon’s, run by a fake doctor who is being blackmailed by the Wallis family and who puts the three men up in a single ward as suspected typhoid sufferers.

Len’s eagerness to get a message to Carol, however, leads the police straight to St Vernon’s, and although Ron and Wally have got wind of the police sniffing around and have cleared out before the police arrive with a search warrant (taking a kidnapped Carol with them), Len leads the coppers to Barrington’s where the Wallis crew has blown the safe and is within a whisker of getting away with it all. Even Mrs Wallis is nabbed after she drops in on the workers… and Carol and Len may be rewarded for their efforts in assisting at the authorities.

This is B-grade movie stuff which struggles to meet that standard. The gaolbreak itself is not only ridiculously simple but, despite being in broad daylight, goes unnoticed and, remarkably, fails to elicit any sort of response from either the prison or the police. There is so little prison-based action it doesn’t even come close to being a prison movie.