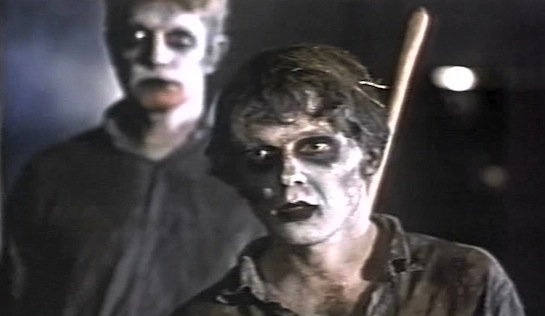 Formaldehyde can be “toxic, allergenic and carcinogenic” according to that esteemed scientific journal, Wikipedia. But here at Camp Hoover, a soon-to-close prison (a little reminiscent of the one in Cool Hand Luke), the prisoners manufacture the stuff, inhale it, douse themselves in it, and enslave themselves to its unexpected narcotic properties.

The prisoners fall into two groups – the formaldehyde slaves, who are also planning a mass escape, and the good guys, typified by Paul Johnson (Marland Proctor), whose pretty wife Carol (Susan Charney) dutifully attends the prison each day to converse with her husband from 30’ away on the other side of the fence.

The bad guys, buoyed by a few whiffs of the CH2O vapour and less troubled by the prospect of others ratting on them after Johnson is pre-emptively stabbed, tunnel out of the prison one night, killing a guard on their way.

But they don’t get far. Their escape is soon discovered and they are all hunted down and shot. The warden (Phil Kenneally), orders the dead men to be buried in shallow graves outside the prison walls, not far from where they fell.

Which is fine… until the formaldehyde-soaked escapees in their formaldehyde-soaked graves start rising up out of the ground, accompanied by pitiful groans. They terrorise Mrs Johnson, who is living nearby in a trailer, and kill a couple of innocent bystanders.

The petrified Carol drives to the prison and is let in. It’s still night. Eight zombies follow her and, armed with picks and shovels, break the few strands of the prison fence with so little effort that you wonder why the bad guys didn’t break out that way instead of constructing an elaborate tunnel. The zombies cease their groaning just long enough to articulate that they wish to “kill the living” (a bit of which they manage to do) and that they also fancy Mrs Johnson. But first, they must seek out the formaldehyde and gorge themselves once more; a top-up.

Fortunately for the prison authorities, the zombies seem to like neither bright light nor shotgun pellets, which ensures that the final scenes are not drawn out. This is particularly good news for the recuperating Mr Johnson, who gets to comfort the recuperating Mrs Johnson. And possibly for the warden, who gets to close his prison with substantially fewer staff to be made redundant.

Garden of the Dead really has very little going for it. At just an hour or so it is surprisingly slow moving, and even the rare gory bits manage to be low octane. But I quite liked it – the 60s feel, perhaps, or the corniness of Carol in her flimsy nightdress, or the agricultural feel of the dirt-caked zombies armed with their crude tools. And I particularly liked the all the compliant prisoners (who didn’t escape) being cuffed to a chain for three days for not preventing the breakout and stopping the guard from getting killed. Simpler times.

Also known as ‘Tomb of the Undead’.