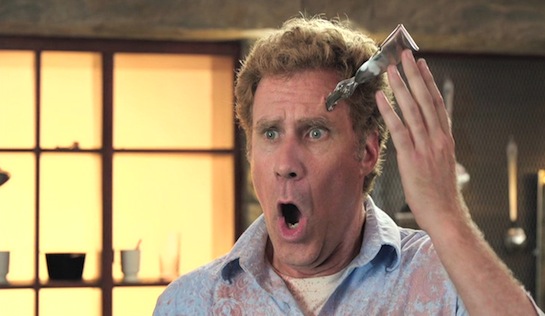 The double entendre in the title certainly gives a fair hint about the level of sophistication in the film’s humour, plus I’d read enough reviews to approach it with major trepidation. But I was pleasantly surprised; by which I mean only that it was not half as bad as I feared.

Its chief premise is not a million miles from Big Stan. Here, super-rich Bel Air resident, James King (Will Ferrell), is found guilty of securities fraud and embezzlement and is sentenced to 10 years in San Quentin. But he’s generously given 30 days to get his affairs in order before being carted off to prison, which is extremely considerate of the court. More considerate than his fiancée, who tosses him aside immediately his earning potential evaporates.

James commits to using his 30 days to prepare for his prison experience – to get hard. For this task he enlists the assistance of Darnell (Kevin Hart), a car wash operator in desperate need of $30,000 to allow him to move his family to a better area. James assumes that Darnell has been in prison because he is black, and Darnell is too focused on the opportunity to get his loan money to disabuse him; he gleefully accepts the role of prison preparation trainer, a task for which he is spectacularly unqualified.

I wasn’t acquainted with the word ‘pantywaist’ until I read one review of this movie. But that’s what James is – a tall, wealthy, educated, white, pantywaist. Soft. Darnell, on the other hand, is short, black and working-class. Lots of laughs, clearly, just putting them side by side, and more by having them both flail about, guessing at what someone might need to do to survive prison.

The fear of rape dominates, naturally; not alluding to prison rape in a comedy of this nature is as inconceivable, it seems, as doing a satirical piece on Donald Trump that ignores his bouffant. Aside from Darnell’s standard training sessions in looking mean, trash-talking, self-defence and bulking up, he helpfully encourages James to get some experience of fellating someone in readiness for the inevitable. That strategy not succeeding, they flirt awkwardly with both the black Crenshaw Kings gang and the white-supremacist Alliance of Whites, hoping to broker some last-ditch protection deals. It’s only very late in the piece – after Darnell concludes that James is in many ways too decent to be guilty – that they turn their attention to trying to prove his innocence.

In addition to the fear-of-rape jokes, there is an ample sufficiency of racial stereotyping jokes. Lots. Most of that is far from new territory, but there are some variations on the theme which seem a bit fresher (such as where Darnell schools James in yard politics, role-playing Hispanic and African American gang members – and a transsexual – each bombarding and wanting a piece of an out-of-his-depth, rich white man… prompting him to ask, “Are there any French gangs? I speak French…”).

Is it a prison movie when the time actually spent in prison is negligible? Well, maybe – in the same way as the Stanford trio, Das Experiment (2001), The Experiment (2010) and The Stanford Prison Experiment (2015) are; they deal almost exclusively with prison themes, attitudes, and preconceptions… which can’t be said for many films set entirely in prisons.

Get Hard is not particularly clever, or new; it is predictable, formulaic and spends far too much time for my liking making light of sexual assault and race. But Ferrell and Hart are solid and it has its funny moments; it’s oddly far from the worst prison comedy of its type.