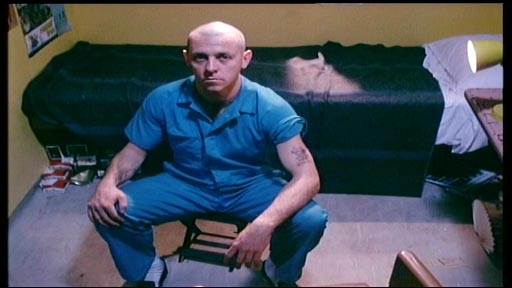 Critically acclaimed Australian movie about a ‘new generation’ prison – with strong, overt references to Jika Jika and Katingal (including a newspaper article on the five deaths from the 1987 Jika fire pasted on one cell wall, and nods to the Russell Street bombing and the murder of Barry Quinn).  Co-written by singer Nick Cave and many others in very-1980s polemic – with considerable input, it would seem, from NSW Justice Action’s Brett Collins and Victoria’s Peter Lawless, both of whom have cameo roles.

The prison (which uses external shots of Nevada’s Southern Desert Correctional Center to create a powerful feeling of impenetrability) is – in some respects, pleasant enough inside (clean, bright, big cells à la Jika, and access to all sorts of recreational items – including hobbies, X-rated films and massive quantities of drugs) and, in a nice touch, many of the instructions to prisoners (eg to move to their cells) are conveyed in a sterile tone by a recorded female voice borrowed from modern train announcers.

Gradually rights and privileges are removed and the prisoners are left with nothing.  Enter Nick Cave as a very disturbed new inmate, and he tips the balance; prisoners and officers suicide and/or are murdered, and all dignity and control is lost – forcing the authorities to commit to an even tougher ‘super-max’.  All that is thought-provoking, and some of it is very well done, but the film is interested only in easy targets: the prisoners are mostly sympathetically drawn, complex but human, the officers universally and one-dimensionally bad – sadistic, drug-running, slothful, weak, dictated to by unions, stupid – and intent on killing a prisoner who has murdered one of their own.   In fact, the only humanity displayed by the officers is when they too realise that the mind games being played by management will bring about a sticky end for them, too.

“The most disturbing aspect is that it’s all true” says the DVD’s cover.  Hmmm.