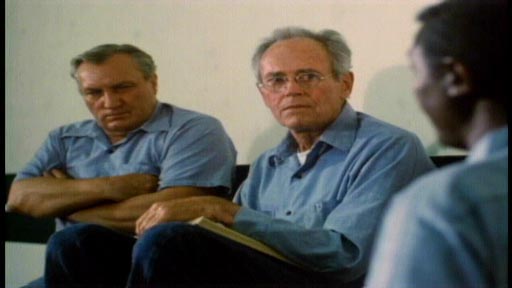 Henry Fonda stars as Clarence Earl Gideon in this episode from the ‘Hallmark Hall of Fame’ TV series. It’s not a prison movie, although it is as a prisoner that Gideon lodges a petition with the Supreme Court of America, asking that it rule the refusal of his trial judge to appoint a lawyer to defend him as unconstitutional.

It’s a true story, apparently pretty faithful to actual events. Gideon is portrayed as an obdurate, slightly frail man, a down-on-his-luck mechanic, who was convicted in 1961 of breaking into a pool hall and stealing some wine and some coins from the cigarette machine. His request to be legally represented is rejected by the Florida court in line with a 1942 Supreme Court ruling. With no lawyer Gideon defends himself, is found guilty, and cops 5 years in the slammer. None of this impresses him.

He reads voraciously from the law books in the prison library and sends a handwritten plea to the Supreme Court, which agrees to hear the matter. Two years on, he is represented in that Court by a team of esteemed lawyers, led by Abe Fortas (José Ferrer), while – in a nice reversal of the trial which was the subject of the petition – counsel for the State of Florida is inexperienced and out of his depth in the big league. The Supreme Court unanimously rules in Gideon’s favour, instilling the right of any accused to legal representation, irrespective of whether they suffer any impediment or the gravity of their alleged crime.

Gideon is not entirely happy with his win. He stubbornly and tiresomely asserts that he shouldn’t have to face a retrial; that a second trial amounts to double jeopardy and is again unconstitutional. He also objects to the same court rehearing the matter on the grounds of bias, and sacks his civil-rights lawyers for whom he fought so hard. Eventually, he is represented by someone he trusts, and is acquitted. Thank goodness.

The prison scenes are unremarkable, which is probably as it should be. Gideon keeps to himself, working single-mindedly as a mechanic during work hours, and on his legal matters at all other times. He gathers a bit of a following – some minor celebrity – from other prisoners who are keen to see him succeed in his petition in the hope that they, too, might win retrials. Or, in the case of one African American man who has been in jail for 23 years, that he might be released.

It’s a competent, enjoyable legal drama with plenty of eloquent argument… and a big win for the little man. 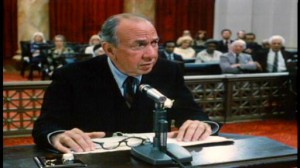 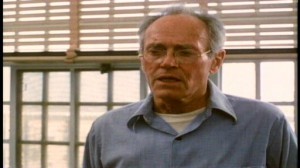