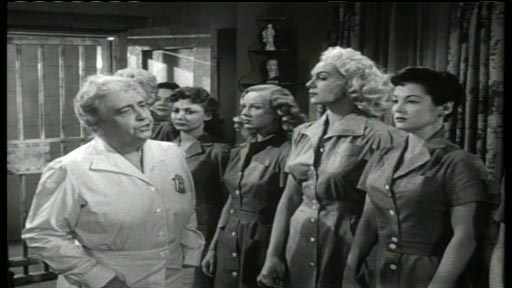 There’s a lot to like about this film. It’s got a bit of a thriller element and has a some delightful, hard-bitten, scheming exchanges between the prisoners. But then it seems that the scriptwriters had a collective mental block and came up with an earthquake, of all things, as the means by which the main protagonists are able to effect an escape, even though one of them is already armed with a gun. Still, I suppose it’s more plausible than a meteorite landing on the prison, or invading martians whisking them away.

Anne Carson (Joan Taylor) cops 5 to 10 for her part in an armed robbery. One of her alleged accomplices is dead and the other is missing. So is the loot. When she arrives in this earthquake-prone prison she vehemently protests her innocence. The wise old Matron doesn’t believe her, but the prison chaplain, the debonair Reverend Fulton (Richard Denning), is prepared to go into bat for her.

Her cellmates don’t believe her, either. There’s Jenny (Adele Jergens), commandingly tall, blonde, an experienced schemer and fixer. The disturbed Dorothy (Phyllis Coates), who killed her husband and believes every new cellmate is Lois, the woman who took her husband and son away from her. And finally Melanee (Helen Gilbert), alternately sweet and vicious, who encourages Dorothy to see Anne as the temptress Lois for the sport of it all, and who plays bad cop to Jenny’s good cop in an attempt to find where the newcomer has hidden the money.

The Rev Fulton tries to find grounds for Anne to appeal her conviction. She oddly tells him not to bother. Then Paul, who emerges as the missing third robber, starts putting pressure on Anne’s much loved father to find where the cash is stashed. She doesn’t waver. Well, not for a long time. Eventually, with Rev Fulton working out that she was involved in the robbery all along and working on her conscience, she considers handing the money back.

Before she can, Jenny gets a gun smuggled into the prison and is about to escape, taking Anne and Melanee with her, when the earthquake destroys half of the jail and the three of them sneak out the back gate. Anne is held hostage.

Everyone descends on the little shack where Anne lived with her dear ol’ dad. The Police get there a little late; they might not know that the money’s hidden there, like everyone else does. There’s a shootout, a significant smile exchanged between Anne and the Reverend (borne of romance, a conscience cleared, or both), and Jenny saying, “I had it coming, kid” in her best gangster-speak as she succumbs to a couple of gunshot wounds.

A little over the top, perhaps, but a worthy 50s flick, nonetheless. 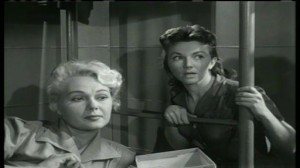 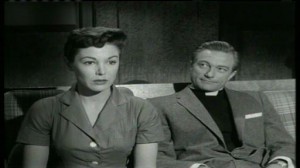