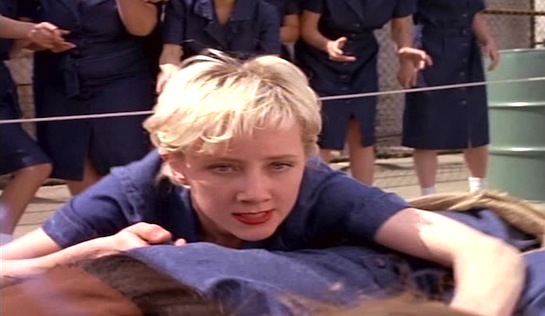 Let’s make it clear from the outset: this is not a campy remake of Girls in Prison (1956). I wish it were.

Instead, it’s a spoof of all women-in-prison films, set in the early 1950s and replete with catfights, shower scenes, gun-toting, hair-pulling guards, an incidental escape, all-in brawls and some very tame (but not very 50s) prisoner-on-prisoner canoodling.

The story revolves around an unworldly orphan girl, Aggie O’Hanlon (Misty Crider), who at just 17 is falsely accused of murdering a record executive to whom she had taken a tape of a song she had written. In jail she teams up with two other murderers, Melba (Bahni Turpin), who had killed a scaremongering anti-communist TV host after he showed footage of her dead brother in the Korean War, and Carol (Ione Skye), who smashed a bottle over the head of a man in a bar after he called an opponent of Senator McCarthy a “commie whore” – not long after her own anti-McCarthyist father was beaten by some angry McCarthyites. Melba and Carol are canoodlers.

Aggie is soon the target of attempts to kill her, and it doesn’t take long to realise that the only person who can identify the song that she wrote (which is destined to become a big hit) and thereby help identify the record boss’s real killers, is Aggie herself. After two attempted hits fail, Jennifer (Anne Heche), an employee at the record label who has prospered outrageously since her old boss’s death, bleaches her hair and engineers a small stint in prison so that she can do the job herself.

There is plenty of material in women-in-prison movies from the 40s and 50s (and from later years) which lends itself to be parodied, but the script is bereft of imagination. The dramatic element of the plot is solid enough, but the lampooning of the prison movie genre just doesn’t work; it’s a bit like trying to send up a 60s beach party film simply by showing an umbrella and a beach ball and singing some surfing songs.

Sadly, not even the staple of early post-war women’s prison films – the all-powerful Matron (domineering, scheming, severe, corrupt) – doesn’t even get a look in; here the Warden’s No.2 is, preposterously, a cigar-smoking male. On top of that, almost everyone plays their part way too straight; only Heche, deliciously hammy and over-the-top sassy, seems to be in on the joke. It is massively disappointing.

I could of course have missed the point, but I much prefer to think that the film did.