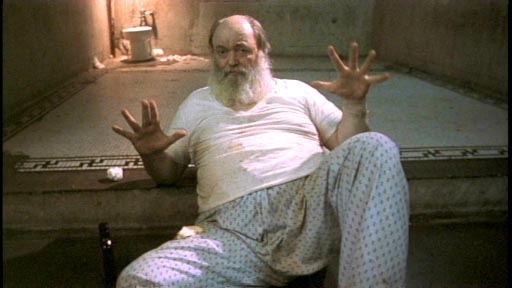 Three men walk into a bar – an Englishman, a Jew and an Irishman. No, sorry, wait… Eight men are held in a New York police cell for various infractions of the law – an Englishman and his recording industry colleague – an American of Asian heritage, an orthodox Jew, a heavily-tattooed Irish-American, an African American, his Hispanic mate and the Arab who refused to give them a ride in his taxi, and a minor Italian-American hoodlum. They join a ranting, smelly, soiled old man (John Ford Noonan) who claims to be God… and just might be.

Some might find the lack of overlap in the ethnicities and religious persuasions of the eight men a little too contrived, and it is. It also leads to some predictably heated and somewhat laboured exchanges between the men: Irish v English, Arab v Jew, Protestant v Catholic. Etcetera.

But there are some small surprises and enough ambiguity and humour to keep it afloat – for almost two hours. One of the surprises is that all the men seem so calmly resigned to a stay in the lock-up. Even Big Rolla (Bonz Malone) and his Puerto Rican mate, Oscar (Andre De Leon), who were chased with a baseball bat by the cabbie Mohamed (Mohamed Djellouli) before all getting arrested, act for most of the movie as though the bloke who got them into the slammer isn’t in there with them. Much of the humour is at the expense of the syphilitic Jew, Zmirov (Peter Appel), who has landed in jail after a sad, vengeful act against a transsexual lover and is prone to sporadic angry outbursts, and the poncy, pony-tailed Englishman, Ian (Shane Franklin).

For all of its stereotypes and cheap shots, writer and director Kamal Ahmed has produced an unusual and reasonably courageous film. It is shot entirely in the one (large) cell, which is a little bit brave and which gives it a stagy feel as a result. But it also dares to explore awkward concepts such as faith and equality and the meaning of life as ‘God’ tries to lead the men to put aside their differences and prejudices. If such talk makes you uncomfortable, there is a late appearance by the Devil (William Smith), for counterbalance.

If you’re looking for a different sort of prison movie, this is different.