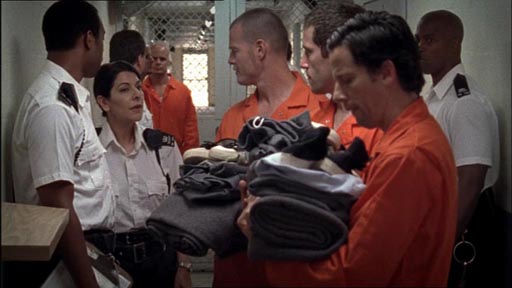 I confess that haven’t seen the original Green Street Hooligans, and I don’t think I’ll be tracking it down soon. Mind you, those who have seen both seem to agree on two things: that this film is the inferior of the two and the sort of sequel that gives sequels a bad name.

You know you’re in strife when this one, dealing with rival firms of British soccer hooligans in prison, is shot entirely on location at the dust-bowl that used to be the Fred C Nelles Youth Correctional Facility in California. It doesn’t look one bit British, and doesn’t sound British, either. So great is the desire to make it appeal to a broader (read ‘American’) audience, it destroys the one thing that could have made it interesting – the opportunity to examine how the peculiarly British phenomenon of  football hooliganism might translate into a British prison setting.

It must also be said that the main character, Dave Miller (Ross McCall), is a very unlikely looking yob. He is married and a pilot, of all things. He looks a bit flaccid and insipid, more like a wedding singer than a member of the West Ham firm. He and his mates Keith (Luke Massy) and Ned (Nicky Holender) take on rival Chelsea hooligans in Fosterville Prison, where they’re banged up after a brawl with some hooligans from Millwall in which Dave’s best mate was killed. Strangely, given their penchant for fighting, they have avoided a physical confrontation with the Chelsea louts for more than a year before this all-in. Then, after the fracas with the Chelsea boys, they are sent for their own safety to Tankersly Prison, which is controlled by Big Marc Turner (Graham McTavish) and his mates from the Millwall firm. Out of the frying pan, and into the fire.

The two gangs do not co-exist happily. There is constant brawling, with blood constantly flying out of prisoners’ mouths and heads no matter where they’ve been hit. While it’s a big prison with lots of different sections, there is no attempt to keep the warring combatants separate… the response is simply to put them all back together for the next round.

It’s an interesting depiction of your typical blood-drenched British prison. It’s warm and sunny, the prison officers routinely bark abuse at prisoners and fights erupt all over the place, drawing baton and shield-wielding riot squads to break up each mêlée with equal force. The Governor is a man with an unfathomable accent, an overcrowding problem, and an office full of war games. His chief support seems to come from Principal Officer Veronica Mavis (Marina Sirtis), who is nasty and corrupt. She traffics drugs with Big Marc, and protects him and his crew, who all hold  key trusty positions in the prison. Assured of that protection, Big Marc is able to maim and disfigure prisoners who upset him with impunity. He welcomes the West Ham boys (“This is my house, see?”) by taunting them about their friend whom he and his mates killed.

Naturally, because Mavis is in with Big Marc, she’s against the West Ham boys… so when the West Ham lads get put in segregation Big Marc gets to use his own key to get into the cells of his rivals and belt the living suitcase out of them. That sort of thing, with no questions, no reprisals.  Mavis might intimidate her subordinate staff, but when all her staff know she’s bent and she openly tells one prisoner in a crowded gym that her fees are going up, it’s odd that her boss wouldn’t have got a whiff of it as well, no matter how stupid he is.

We’re supposed to be on the side of the West Ham boys, given that they’re behind the 8-ball, but none of them are particularly likable, either. Dave enlists the support of a sympathetic Officer, Arthur Mason (Treva Etienne), who is increasingly troubled by his boss’s activities, but is too scared to do anything about it. When the Governor asks Mavis to prepare a list of prisoners who could be easily released back into the community to relieve the the overcrowding problem, Mason draws up an alternative list. Mavis’s has all the Millwall boys; Mason’s the Hammers. The Governor decides to hold a soccer match between the rivals, gladiator-style, to determine who gets to be released early. As you do. Violence on the pitch is of course tolerated as it’s reasonable that the most successfully violent gets to be released.

I’m not sure there’s one redeeming feature in the entire film. 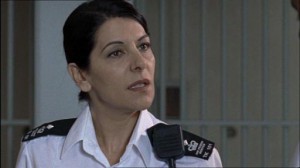 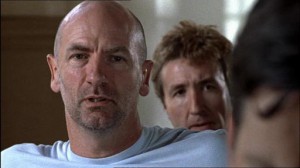 Thanks to L Norman for bringing this piece of tripe to my attention.