I’ve seen a surprising number of people (OK, four, maybe) write in to movie sites asking for the name of the prison movie where an innocent American man escapes a Russian prison in a secret compartment in a truck or a train. I’m nor sure why it’s quite so forgettable or, if it is, why people later want to retrieve its name. This is the film; it’s called Gulag, and it’s a train, not a truck.

In some ways it’s a companion piece to films such as Red Heat (2005) and a stack of other two-dimensional films from the Cold War era. It doesn’t really matter that the camps of the type to which the main character is sent were no longer termed ‘gulags’ in 1985; we of course know what the word ‘gulag’ represents. But at least there are good guys amongst the Russians; yes, the KGB, the Government and its agents (the prison guards) are all bad, but its citizens are pretty much decent folk – all victims of the same brutal totalitarian regime.

Three-time gold medallist runner Mickey Almon (David Keith) is in Moscow to cover the Spartaca Games for an American TV network, when he is approached by a scientist who wants him to smuggle some research back to the West. Mickey is saved from constant mulling over whether he should or shouldn’t by being arrested by the KGB. He is thrown into a mouldy cell with its floor permanently under water, and every day he is offered the opportunity to confess to being a CIA operative. He stays there for 10 or so weeks, fruitlessly asking to see the American embassy and refusing to admit guilt. His wife (who was with him in Moscow), his employer and the US Embassy seem unable to bring any pressure to bear on the Soviets; he hears from and is visited by none of them.

Eventually he is tricked into making a video confession, having been told that if he does he will simply be deported… while if he refuses to do so, he will certainly be convicted because the Soviet authorities won’t want to admit that his arrest was wrong. Thinking that he’s being taken to the airport to get on a plane back to the US, he is instead loaded onto a train going to a labour camp in Siberia. He is informed there by other prisoners that he has been sentenced to 10 years for espionage, and is given some quick lessons in prison survival by two other political prisoners – a Jewish professor, Matvei (David Suchet), and a Cossack activist, Hooker (Warren Clarke).

The prison camp is at the bottom of a limestone quarry. Mickey goes into the easier section of the camp – for foreign prisoners – where he sews gloves, while the Russian nationals go to their own area and do hard labour like chopping down trees. One night there is an explosion in the Russian camp and the guards open fire on the prisoners, some of whom may be trying to escape. The dead bodies of the victims are strung up the next day as a reminder to all about the folly of wanting to get out of there.

One of Mickey’s fellow prisoners is a cynical English spy (Malcolm McDowell). In a plot device borrowed from every second romantic comedy, Mickey and the Englishman (whose name is much later revealed as Kenneth Barrington), take an immediate dislike to the other (so you know they’ll fall in l.. become best friends). Mickey objects to the Englishman stealing from a dying man. Barrington despises Mickey’s gung-ho American outrage and naiveté, and delights in setting him straight on things like what taking a sandwich means (two escapees taking along a third, weaker man, so that when he dies they can eat him), and warning him that when his food packages from home stop coming it means that the Russians have written to his wife and told her that he has died. The quicker you accept that you’ll be in prison forever, Barrington tells him, the better off you’ll be. “You just gave up,” Mickey retorts, and lectures him on the dignity of the fight. And then his packages stop.

Inspired by a magic trick involving a box with a secret compartment, Mickey devises an escape plan. But first, he jumps into an open sewerage pit and drags Barrington (who has had a change of heart and no longer wants to spend the rest of his life in prison) and a prison guard in there as well. After some time in punishment boxes, the two prisoners get six months in the Russian section – which is exactly what Mickey hoped for as he wanted to bring Matvei and Hooker into his plan. Their arrival is not well received; Hooker thinks they are idiots and is aggrieved that he has to call in favours to get them into his dormitory.

But then another prisoner (who was taunting a guard about having his hand stabbed) is systematically shot in both hands and the leg by the humourless guard, and Hooker joins the fray to put him out of his misery. His intervention is not appreciated; the guards start firing at everyone and Hooker swiftly gets 15 years added to his sentence. Hooker no longer thinks of Mickey as an idiot; he asks to be counted in on the escape bid. Matvei declines.

And, as far as escape bids go, it’s not a bad one. The internal wall of one of the train carriages is removed and then reconstructed, and when the three men secrete themselves behind the new wall, a captured fox is released to disrupt the counting of those returning to the camp, and three more sneak back to be counted again. The train departs into the ice and snow – a little reminiscent of the escape scenes in The Walls of Abashiri Prison (1965) and Runaway Train (1985). The men jump off the train into whiteness and hope that they’re trudging towards freedom. When Hooker slips and gets a compound fracture to his leg, do they just leave him to die? Do they eat him? These are representatives of the free world, remember, so clearly their behaviour sets them apart from the savage Russians… and luckily they stumble into Norway.

It’s a battle, ultimately, to determine whether this is more about the indomitable American spirit, or domitable Soviet tyranny, or the failure of the American embassy to intervene on behalf of one of its high-profile citizens. As a depiction of prison, it fails to convey the real harshness of the Soviet system if that’s what was intended. Yes, the guards open fire on the prisoners with a little too much enthusiasm and too little provocation, but the prisoners are well clothed and none of them seem to lose any weight. Even when Mickey sabotages the gloves he is sewing the guard remonstrates with him… and that’s it. For an all male camp, relations between the prisoners are surprisingly cordial.

But none of that matters, really. It’s the secret compartment in the train that people remember. And then promptly forget. 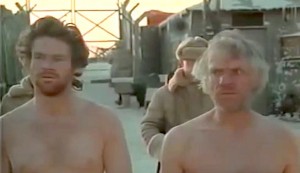 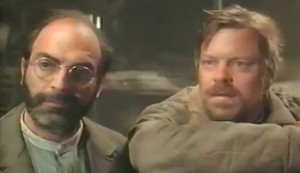 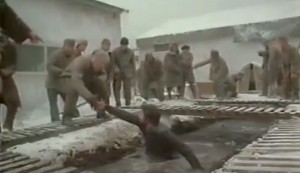 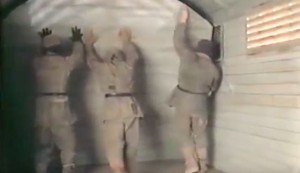