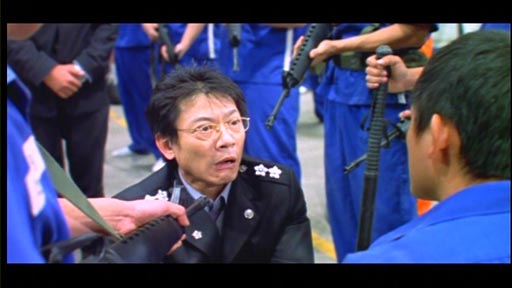 If it’s true, as this film’s publicity would have you believe, that this is Korea’s best comedy, you have to feel a bit sad for the Koreans.

Moo-suk is committed to escaping from prison, and has spent six years digging a tunnel with a spoon. Luckily, he’s remained in the one cell for those six years. At the last moment, for some unexplained reason, he agrees to let a cell-mate whom he doesn’t like, Jae-pil, escape with him. Jae-pil is keen to do a bunk because his girlfriend has given up waiting for him to be granted amnesty and is about to wed another man – a policeman, of all people! Moo-suk just likes the idea of escaping.

They succeed in tunnelling out one night, only to read in the papers the next day that they’ve both been granted amnesty. Oh, oh! They do a deal with prison staff, who are all immensely fearful of losing their jobs because of the escape, to hush it all up and have them released legitimately – provided they can get back into the jail. The difficulty is that Jae-pil doesn’t want to go back as has unfinished business with his girlfriend – and her fiancé wants to arrest them.

It’s madcap. There’s an awful lot of slapstick and people yelling at and fighting with and abusing each other in a very madcap sort of way. To be honest, there’s much more (unintended) humour in the visual impact of the prisoner group. The meanest and nastiest of them has the prison system’s only tattoo on his back, drawn in texta. All the other prisoners are very presentable young men, indistinguishable from the guards. Until they riot.

Perhaps in Korea there is an edginess to the humour in poking fun at officialdom: prison bosses who are interested only in keeping up appearances, politicians who are corrupt and lacking in courage, and prison officers who are weak and ineffectual (and some of whom are degraded by having to wear prisoners’ clothing to make it appear that there are the right number of inmates at muster-time); maybe those things constitute dangerous, pushing-the-boundaries satire. Outside of Korea, it’s a long two hours.