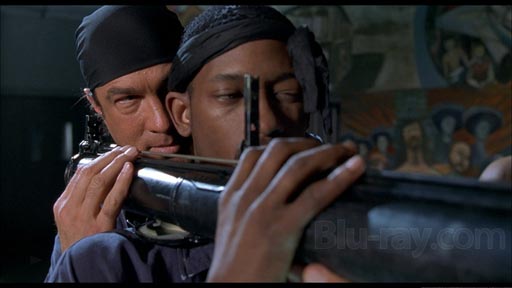 I know that this claims to be an action movie, but it’s really a love story.

Sasha Petrosevitch (Steven Seagal) is an FBI agent, motivated by the love of his late wife to get even with her killer, a big time crime boss. He gets ‘arrested’ while working undercover for the crime boss, and is placed in a reopened, hi-tech Alcatraz, where he hopes he will get more incriminating evidence from a faithful old partner in crime, Nick, who is locked up as well. It’s shiny and hi-tech, this new Alcatraz, but awfully forgiving; Sasha and Nick have a decent punch-on with a guard on reception, but the hard-as-nails Warden accepts Sasha’s explanation for the fracas and no further action is seen to be necessary. You can tell that he feels the love, too. Sasha, meanwhile, is thwarted in his intelligence-gathering mission when a group of commandos rudely drop into the prison, hoping to extract from a soon-to-be-executed prisoner the secret location in which he has hidden $200 million of gold bullion. But Lester, the man already strapped into the electric chair, ain’t about to say nothing, and so the commandos shift their attention to a visiting judge, there to witness the execution, and promptly take her hostage. Sasha forgets his undercover role and immediately sets about rescuing the good judge. And that’s when love really starts to blossom all around. In the chaos, Sasha leads all the prisoners to the armoury, where they arm themselves with the most fearsome-looking weapons. Their love of firearms leads them to use them against the prison invaders, whom one might expect to be reasonably well disposed towards criminals, rather than take over the jail or use them to try to escape in the mayhem. Why have a gun if you can’t shoot at someone, perhaps? The crack marksmen commandos and the desperate criminals then unexpectedly show love for the precious gift of human life; I counted 37,216 rounds of ammunition fired with only about six casualties. Seven, maybe.

And then Nick, to whom Sasha confesses at gunpoint that he is really an undercover agent, doesn’t kill his double-crossing mate as you’d expect 99.9% of hardened criminals to do under the circumstances, but helps him fight for the good guys against the commandos. In fact, they remain best buddies after it’s all over, despite those wee misunderstandings and the unforgivable atrocity of Steven Seagal’s hairstyle. Ah, love. 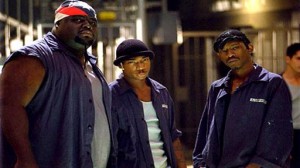 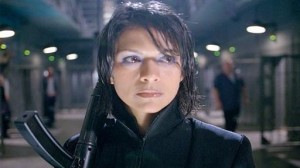