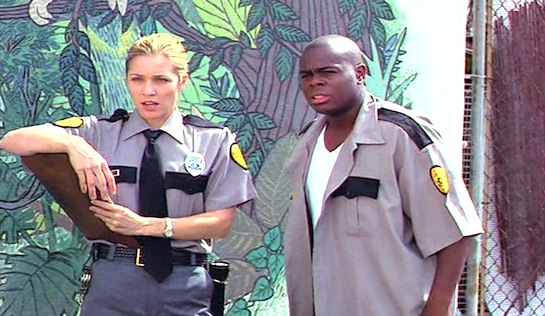 “Comic icons Pat Morita (The Karate Kid) and Demond Wilson (Sanford and Son) star in this hilarious tale of bumbling prison guards, who on their first day let two dim-witted bank robbers escape during a jail transfer.” So says the blurb on the back of my DVD – so staggeringly wrong that you have to marvel at its audacity.

Sgt Jimmy Hammer (Roger E Mosley) is overseeing the closure of the prison in which he has worked for 30 years – after which he has chosen to retire. All his prisoners – bar eight – have already transferred into the new prison that has been built next door… but which is being filled a little ahead of when it should be. The electronic locking mechanisms of the new nick don’t all work, and there are other teething problems.

What is scheduled as Jimmy’s last day in the job is also his nephew Reggie’s first. Reggie (Reggie Currelley) is the ‘bumbling’ bit of the blurb. Experienced guard Megan Blake (Audrey Sarn), who is the antithesis of bumbling, is asked to show Reggie the ropes… after they have already locked horns, racing each other into the prison and in the car park.

Before they get too far, the technology-troubled new prison decides to close down its power to allow work to be done on its locking system, not thinking that it will affect the old prison (the cell locking system of which is bizarrely linked to the new jail) as all its prisoners were supposed to have moved out. Goodness knows what mayhem erupts in the new prison, but the old prison’s cell doors all open and all of the eight prisoners make a run for it. Reggie and Megan round up most of the fugitives using some classic slapstick methods, but two – the not-completely-dim armed robbers, Ward Clemson (Sal Lopez) and Bobby Lomax (David Marley), both serving 10 years – make good their escape. However Jimmy Hammer’s trusted trusty, Morgan (Wilson), convinces everyone that if the prison reports the escape Jimmy will lose his pension, his bonus, and his new car… and so they decide to keep it quiet and Megan and Reggie are given the huge task of tracking them down and bringing them back. All within 20 hours.

Very quickly the odd couple deduce that Clemson and Lomax are almost certainly looking for the unrecovered $500,000 proceeds of their bank robbery. And then, in no time at all, they narrow their search to a small number of 1979 Ford Pintos in which they suspect the money might be hidden, and their chase takes them (amongst other places) to a strip joint and the headquarters of a Yakuza with a Chinese/Vietnamese name, Un Huong Lo (pronounced One Hung Low, ho ho) (Marita) who deals in smuggled cutesy Japanese toys. Fortunately Reggie’s mother is a seamstress and he has a range of her clients’ fancy clothes in his car – which come in handy as they play strippers, pimps and other assorted roles.

Would you expect an odd couple (one man, one woman; one African-American, one white; one sloppy duffer, one neat Miss Efficiency) to fail under such circumstances?

The film is surprising in a number of ways. The portrayals of the Warden and his Sergeant are extraordinarily sympathetic; they are good, decent men, respected by the prisoners (if not all staff) and pretty solid citizens. It’s a little nostalgic for the ugly old jail, and a little sceptical of the modern sterile one. It’s unashamedly nostalgic for ugly old people (well, not too ugly), and very sceptical of modern ambitious ones. And it takes a little, gentle swipe at the ‘three strikes’ law (substantially amended in California a decade or so later, in 2012); an unexpected political statement in an otherwise very benign, tame comedy.

Is it funny (always a good test of a comedy)? Well, not really, but it’s comfortable and inoffensive, and the good guys win and the bad guys lose. Hooray!