You know exactly the sort of action movie this will be from the first scenes. ATF Special Agent Nick Adams (David Bradley) enters a warehouse crawling with criminals in the midst of an illicit firearms transaction – and does it alone (apart from an undercover man already inside), crashing through a skylight after dropping from a helicopter. He wounds, but fails to kill, the main target, Jimmy Wong (Yuki Okumoto), the only survivor of a score of bad guys. Somehow Nick manages to dodge three billion bullets and several grenades and escape with his life, too. But an innocent woman whom Wong takes hostage is killed; Nick takes that very badly (either that or he shrewdly seeks to keep some distance between himself and all the vengeful associates of those he killed), and heads off on a prolonged sabbatical.

He is tracked down by beautiful fellow Agent Hannah (Benita Andre), who breaks the news to him that his best friend, Mani, was murdered while undercover in the local prison. Nick, of course, insists on going undercover in the jail himself to track down Mani’s killer. Maybe if he were even a little bit successful in the control of Alcohol, Tobacco, Firearms and Explosives in his time at the ATF he would have locked up some people who could surely blow his cover in prison. That doesn’t seem to be a consideration. Or maybe no-one has survived his ‘arrest’ operations to make it to trial. No-one knows that he is undercover except his boss, Larry Dickerson (Clabe Hartley)… but he takes sensible precautions like using only his first name, Nick, and not wearing his ATF badge.

He is thrown into a very spacious cell with the big bald guy, Mr Clean (Jim Maniaci), whom he of course has to fight on their first night together; after which Clean respects him and they combine to fight common adversaries. Two of whom, Lee (William Wong) and Chow (Johnny Koyama), Nick stitches up… but in doing so runs foul of Officer Riggs (Alon Stivi), the corrupt Warden’s corrupt violent attack dog, who uses his metallic PR24 to urge Nick to show some more respect for them. “They’re my boys,” he’s told.

Despite this hint, Nick is, well, indiscreet. Stupid. He sidles up to people he doesn’t know (including the prison’s top dog, Galaxy 500) and asks about Mani’s murder – not knowing whether they personally killed him or had him killed because they discovered he was a cop. “Mani was a friend. Close.” he tells them, injudiciously. Nosy and stupid.

And then Jimmy Wong arrives in the prison, having finally recovered from his gunshot wounds, and Nick’s cover is well and truly blown. Nick hastens to seek an audience with Warden Pike (Charles Napier), but Pike is in with Riggs and with Lee and Chow and Jimmy Wong…. and the only reason they don’t kill him (but just toy with him, with a playful stabbing that puts him in a coma for three days), is because they think that Hannah, who has masqueraded as his attorney, might ask questions. Hannah, meanwhile, has been doing her own detective work on the outside and has established that another huge firearms deal is about to go down in the prison, involving all the people who want to see Nick killed. Nick, fearful for his life, tries to escape, but is caught at the last hurdle.

By this time Galaxy and Clean and the whole prison population know that he’s a cop, but when he manages to free all the prisoners from their cells and they start rioting, no-one goes after him, partly because Galaxy civic-mindedly doesn’t want the community flooded with Pike and Wong’s nasty firearms. But much more hand-to-hand fighting is required, amongst the protagonists Riggs, who is so tough (or Nick suddenly so ineffectual) that after being struck 19 times on the jaw by Nick he is still standing. After which you’d think that Nick might want to give his fists a break, but he leaves Riggs’ PR24 (‘The Ugly Stick’) on the ground in pursuit of more people to punch sub-optimally… until he finds himself magically in possession of two guns. And then it gets sillier. Really silly.

Am I a fan of these action flicks? No. Can they be diverting? Sometimes, as this one is, for a while. But I just wish the writers and directors would spend as much time on looking at whether a serving cop with a reputation and profile such as Nick’s might struggle to go undercover in a prison, as they do figuring out how to stage a fight when both combatants are dangling by one finger from a helicopter. That would make Alex Greenwood’s searches really worthwhile. 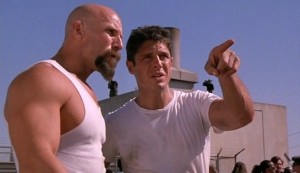 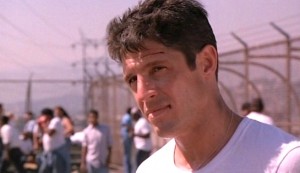 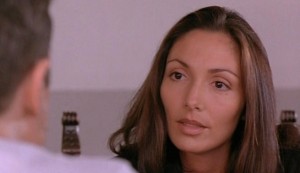 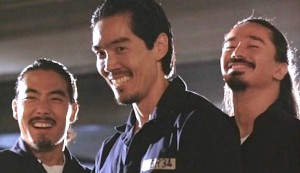