It’s 1984; the Central Tennessee State Penitentiary. George Martin (Gbenga Akinnagbe) is an African-American man, serving a 40-year sentence for a robbery he committed when he was just 18. A fellow statutory resident his best friend, his road dog, Andy ‘Doc’ Dixon (Jackson Rathbone), with whom he’s been locked up pretty much since they were both kids. Doc is white, the go-to man in the prison for whatever you need, a singer, defender of the weak and all-round good guy. George’s cellmate for half a dozen or so years has been Crystal (Shawn-Caulin Young), a white trans woman, who does his washing, looks after him, and is on the gear. Those two, along with his boxing, are pretty much all George needs.

He’s a fine boxer. He’s known as ‘The Hammer’ and destroys all of the boxers his and other nearby prisons can throw at him. He even knocks out a former heavyweight champ from the outside who is about to take another tilt at the title. There’s talk that George might be in the running to represent the US at the Olympic Games. He’s that good.

But not unusually, there’s trauma in his back story. He’s watching TV when it shows a local deputy sheriff who has just copped four years for 27 sexual offences committed  against kids. It triggers a major physical reaction. Both Doc and Crystal run after him. Doc has always been dismissive of Crystal, and maybe a bit rivalrous; he’s not a fan. He tries to pull rank; he tells her to pull back, to give George some space. “And you think he told you everything reform school, do you?” Crystal spits. “More than he told his celly, I can assure you,” says Doc. “You don’t know anything.” “I know why he hates.” “And I know why he hates white men looking at him.”

Crystal, alone, knows what George needs. She hand embroiders a fighter’s robe which says, ‘George Lee Martin – Champion of the World’ and there’s love and healing in that robe that no road dog can provide.

The Olympic officials come to make him an offer; a no-brainer of a deal. They can secure his release if he fights for his country. George bravely puts a condition on it – that they release Crystal, too. The warden and the boxing official are outraged. “There are no homos in boxing!” George is told, and he is sent back to his cell, supposedly in disgrace. George goes straight to the mess, finds Crystal and kisses her on the lips, in front of all the others. Even in a jail in which there is a conspicuous coterie of trans women, all with known lovers and protectors, the prisoners are scandalised. The men drop off George; his reputation is shot and they refuse to have anything to do with him. And, with predictable vindictiveness, the warden arranges for Crystal to be transferred to another prison.

When Doc is let out of solitary, where he’s been after putting a shank in a business rival many times over, he’s little shocked to find all this has happened in his absence. He’d never picked his road dog for someone who would fall for ‘a cissy’. And he underestimated the loving relationship between his pal and Crystal. “I can’t wrap my head around it…”, he says. But, “You find love, you go after it.”

The story of a man loyally sacrificing his one shot at honour and fame, an early shot at freedom, and some of his reputation and friendships, all for an unlikely, loving, caring relationship, is so much bigger than just the story of a boxer who could have had Olympic glory and blew his chance. As is another man standing by his friend whom others have deserted. That it’s based on a true story, in this case makes it even more powerful.

Many of the hallmarks of a traditional prison movie pop up throughout the film, condensed into a short space of time, just to remind us of the setting: the drug trade, the guards on the take, the female guard who provides sexual favours, the warden interested in how much money he can make from his star athlete, the over-the-top extravagance of the trans prisoners, the stabbings, the rapes, the racist guards and inmates, and several gruesome acts of revenge. Even a gullible young prisoner being conned into asking the warden to sign his sorry papers gets a run. None of that is at all original and much of it is unnecessary, even if much of it may be faithful to what happened over the protagonists’ long prison careers in real life. More complex (and probably more worthy of exploration) are the issues of faith – Crystal’s assured belief in God’s love for her (and in 2 Samuel 1:26) and Doc wrestling with belief, amongst others – and the fluidity of sexuality in prisons. But they are all really sideshows to a spectacular prison love story.

This is a terrific prison movie, with strong performances all round (with Young’s Crystal the standout). It’s not your traditional prison fare, and it’s powerful stuff.

One expects that some of those who were enticed into watching the film to see The Hammer hammering might have felt cheated. Not so others. 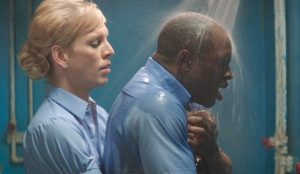 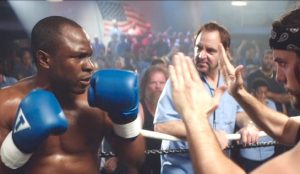 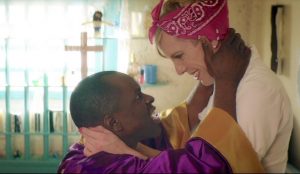 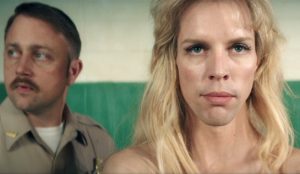 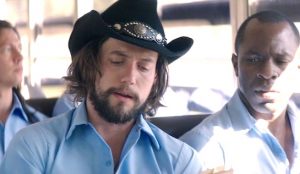 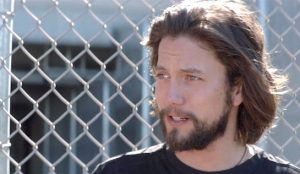