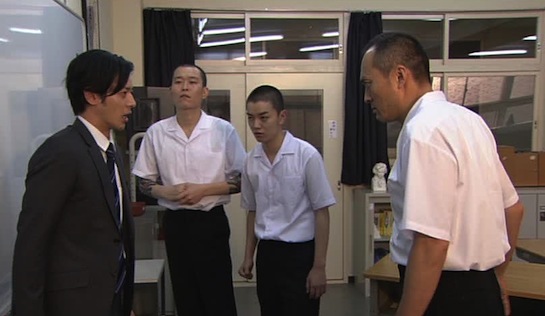 This could just as easily be called ‘In Defence of Prison Education’, if providing education to prisoners ever really needed defending.

The film’s central character suggests that it does. Jupei Ishikawa (Joe Odagiri) isn’t at all convinced that teaching prisoners isn’t a futile exercise. The trouble is, he’s their new teacher, having reluctantly given up (well, not quite) on his dreams of becoming a photographer, and having spent the five previous years teaching in a reformatory. He hates crime and criminals, and is cynical about the significant investment in just a few miscreants that his role represents.

His job is inside the Matsumoto Juvenile Prison, where since 1953 the real-life prison has been offering a compressed program to get adult prisoner students to graduate at the junior high school level in just one year. The program takes just five prisoners from all over the country. It’s a rigorous and intense program; full days studying, and strict rules. Talking – other than in the half hour lunch break – is prohibited lest the men get close and then team up in committing further crimes.

It’s a diverse group: there is Akio Sasaki (Hideji Otaki), an angina-suffering 76-year-old who mercy-killed his demented wife (for whom he’d cared for 10 years) but then ‘lacked the guts’ to kill himself; Jack Harada (Kei Suma), a 66-year-old gigolo who is serving a sentence for marriage fraud; Zentaro Oyamara (Seiji Chihara), a yakuza-connected, 39-year-old lout who accidentally killed a child by arson; Kibo Kawada (Ken Watanabe), a suicidal 50-year-old who killed two men who made fun of him and insulted his mother; and the youngest, Shuichi Tanaka (Shota Sometani), who at 22 is serving a sentence for stabbing his domineering father, with whom he had performed for years in a traditional dance act. You can see why talking is forbidden; they could easily form a father-stabbing crime syndicate or, worse still, a mercy-killing gang.

The men are linked by several things: their literacy and numeracy deficits, for a start, but also by the despair that has run through their lives. In most cases they had childhoods disrupted by tragedy, simply stopped going to school and never learned to read or write. And they remain a troubled lot: some burdened by heavy guilt, some too ashamed to face their families. Kibo’s sole hope is that he will be reborn in his next life and he is anxious to get there; he is nonetheless very respectful of the system and refrains from suiciding inside the prison because it is prohibited, but is hopeful that the program might afford him the opportunity to kill himself on an outing.

The men make good progress; some more so than others. As they achieve little victories it could get awfully mawkish, but generally resists the temptation, largely through concentrating on their ongoing battles. Oyamara, for instance, struggles with his studies, seeks to quit (but is kept on rather than have his ‘loser’ status reinforced), and in frustration starts bullying the other men. Tanaka is visited by his forgiving father, whom he wounded, and is unable to find any words to say to him.

While the prisoners wrestle with their individual demons, Jupei too battles with the realisation that he doesn’t have the talent to fulfil his photography dreams. And tensions rise when he disrespects his students by drinking himself into a stupor and attending late on the very day that the men, all of them nervous and full of anticipation, had been due to make their first ever presentation to a class. In the end, all of the men are changed for the better, and their pride in graduating is palpable.

The message is unashamed and  clear: Education can give prisoners the self-esteem that they lack, new problem-solving skills that make them less likely to return to crime, can reconnect them with family and give them new dreams. And that it’s just as much worth delivering to an ailing 76-year-old as a young man with a whole life ahead of him.

The film was made for TV and filmed inside the Nagano Matsumoto Boys’ Prison; its visual flatness detracts from the viewing experience, but it has a very credible feel. And by presenting the prisoners as complex men who exist quite apart from both their offences and their status as prisoners, it creates a better understanding of the connection between disadvantage and bad life choices. And it provides a compelling view that addressing that disadvantage can turn lives around, which is something that, over time, even Jupei comes to acknowledge.

A School Behind Bars has a disarmingly optimistic message, a gentle humour and, at its heart, a belief that prisoners’ lives can be transformed. It’s well worth a look. 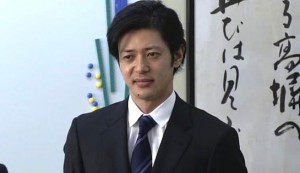 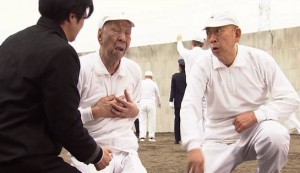