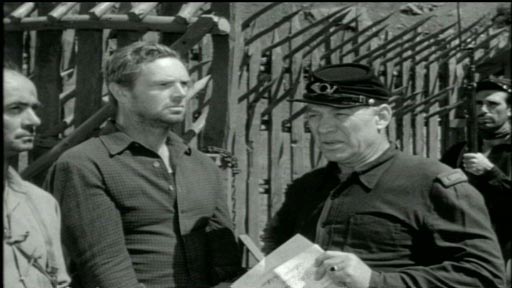 This is a curious film. Curious because it implies that it is based on a true story and most probably isn’t, because it is one of the few westerns (replete with Cowboys and Indians) to cross over into the prison movie genre, and because it is a pretty blatant rip-off (sorry, re-telling) of The Prisoner of Shark Island (1936). It also features arguably the best underground prison in movies before Fortress (1992).

It’s Kansas, 1867 – two years after the end of the Civil War. Like Dr Samuel Mudd in Shark Island, Gilman Hanley (Sterling Hayden) is a man in the wrong spot at the wrong time. Whereas Mudd was bound by his Hippocratic Oath to treat John Wilkes Booth, Hanley is not quite so bound by his Veterinarian’s Oath to attend to injured Confederate guerrilla Vern Brechene when Brechene drops in on him after a fall from his horse. But he does, anyway. Without Hanley’s knowledge, Brechene then swaps his tired, stolen horses for Hanley’s fresh ones, and drops $5,000 which is later found by troopers.

The troopers arrest Hanley for providing assistance to the terrorist cause. Hanley insists that the real guerrillas will exonerate him, but when Brechene is captured he implicates the vet out of sheer spite, possibly for being a weak ex-Confederate soldier… or because he didn’t tie a good bandage. End of story, as far as the military court is concerned. Hanley is taken off to Hellgate, an underground prison in a canyon in the New Mexico desert.

Hellgate has all the features that you would want to see in a hellish desert prison: steep canyon walls forming natural barriers to escape, nasty spikes on everything above ground and an equally as nasty Sgt Major, barred caves which serve as underground cells, a collection of Pima Indians who get paid to catch and kill escapees, two novel punishment cells (metal coffin-like boxes, baking in the sun, in which the prisoners can only lie, face up), whippings, and a Commandant, Lt Tod Voorhees (Ward Bond), who really, really dislikes Confederate guerrillas. Oh, and virtually no water.

Voorhees’ hatred of Hanley is so strong that he tries hard to provoke the vet to escape – to give him a reason to shoot him. Hanley doesn’t exactly get on with his cellmates, either, but they find something in common: the desire to escape – even if in Hanley’s case it’s more the desire to break into the Commandant’s office to retrieve letters that his wife has written to him. They find a convenient fissure in the roof of their cell, and with breathtaking ease manage to remove sufficient numbers of rocks to allow them to get to the surface.

One of the cell’s occupants, Jumper Hall, promptly rats on his mates to Voorhees, who arranges his men to shoot the escapees as they emerge from the crevasse. In the excitement the prisoners manage to get away on horses they had very cleverly arranged to be brought across the desert and be left waiting for them, without anyone noticing. They knock off Jumper, whom they rightly guess informed on them, and manage to kill quite a few Pica, who kill quite a few of them in return. Hanley is captured and taken back to the prison for more coffin punishment.

But then there is an outbreak of typhus. This is a significant departure from Shark Island, which was awash with yellow fever. And was on an island, not out in the desert, now that I think about it. Anyway, the locals blockade the town, and won’t give the prison any water, fearing that exposure to those who have been in contact with the typhus sufferers will bring the fever into the town. Voorhees reluctantly looks to Hanley, who knows the way across the desert – having found a hand-drawn map on the inside of the coffin door – and gives him the job to go to Mexico to bring back some water. Why he is sent alone rather than with an escort is not clear.

Hanley leaves the prison and immediately turns his horse in the other direction. Voorhees thinks he is escaping with the money and orders his men to open fire. But Hanley has a plan. He goes to the blockade, one day’s ride away instead of six, and convinces them that the best way to stop the spread of typhus is to cure it at its source – at the jail. He returns with life-saving barrels of water. Hooray!

Voorhees is so indebted to him he concocts a story of a prisoner asserting, just before he died, that Hanley was never one of the guerrillas (it’s not a complete concoction – Hanley said that he would), and soon Hanley is free to return to his beautiful wife. Hooray!

As this is a western, the heroes are tough men. The coffin hardly takes any toll on Hanley at all. He is so tough (or, more probably, so wooden), that when he is shot in the arm while trying to get water, he barely bleeds. That’s tough. Except when someone won’t hand over his wife’s letters.

And because it’s a western, there are tough lessons all round. For prison guards: check your cells for massive fissures. For operators of desert prisons: don’t rely on others for water. And for veterinarians: stick to animals. 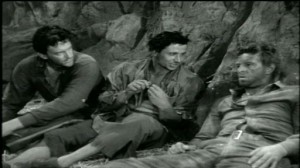 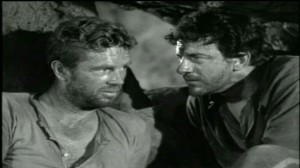