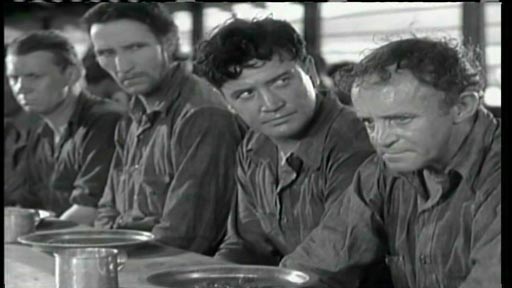 This is an exploitation movie, of a different kind. 1930s-style.

William Billings is building a highway (quaintly named ‘Liberty Road’) in an undisclosed American state, using chain gang prisoners for very cheap labour. It’s hard, tough work, and the project has had its minor irritations – like young prisoners who’ve been placed in the ‘sweat-box’ for punishment and then dying in there. Still, the road’s on track.

Frank ‘Duke’ Ellis (Richard Dix) is the toughest con in the show. He plans to escape – using Matthew, a man with three wives and a dabbler in spiritual hocus-pocus – to distract a guard who is in desperate need of some moonlit palm-reading. The ruse works and Duke is just about to scarper when he sees his newly-arrived younger brother, Johnny (Tom Brown); he can’t leave him, and returns to his bunk. It turns out to be a good move – the two prisoners who tried to escape with him are brought back into the camp the next morning, suddenly in need of interment.

Johnny is young and hot-headed, and wins a spell in the sweat-box after attacking a guard who had the temerity to strike him with a whip. Duke rescues him from the box by blackmailing the same guard who, after consulting Matthew, shot and killed his cheatin’ wife – the murder having been conveniently pinned on the two dead escapees. But the deal Duke does in saving his brother comes at a cost: his side of the bargain is to pacify the hungry and disgruntled workers so they don’t delay the road-building. Some of the other prisoners feel that he has sold out. They’re right.

Johnny is given a trusted clerical position, and there comes across papers for Duke’s extradition to Michigan where he will be imprisoned for life. He can’t stand by and watch that happen, so from his privileged position engineers a mass escape. Freshly-armed and freed prisoners lock the guards into sleeping quarters. As fire rages through the camp, Johnny frees the guards so they don’t incinerate, but does less well in saving himself – as he runs, some young kids from a posse shoot him in the back – their task made a bit easier by the fact that all the prisoners have targets conveniently painted on their backs. Duke is led to his fallen brother and, instead of making good his escape, carries the wounded Johnny back into the camp to get medical help.

Billings wants Duke hanged for his role in the escape, but is arrested himself on murder charges after it is discovered that he ordered the lethal sweat-box. Justice prevails. Or may prevail.

Like most of these early ’30s movies, it is fast paced (only 62 minutes) with plenty of stuff going on: a charismatic star in the lead role, a heartwarming tale of fraternal loyalty, some fights, escapes, villains, good guys on both sides, humour (in the shape of Matthew’s fortune-telling and insistence, at the end, that “prison is a pleasure” compared to dealing with three wives), and some truly wonderful chain-gang work songs. It’s a good’un. 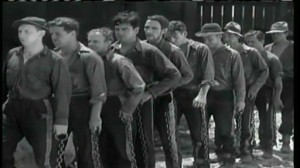 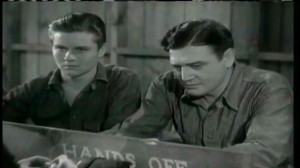