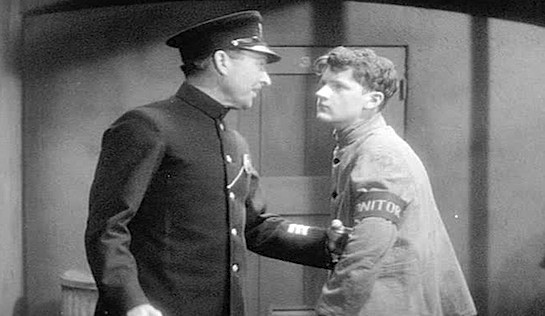 “What are you, Kelly? A man or a rat? You’re a rat!” says newspaper editor Frank Gebhardt to Matt Kelly. This is a film about that rat… and the kid who suffers from his ratdom – his rattee.

Jimmy Mason (Junior Dirkin) is a 14-year-old good kid living on a farm with his loving mother, when she is hit by the only car within a trillion miles and is killed. Orphaned, he lands on the doorstep of his aunt and uncle in the city – an impressionable, loyal, innocent country bumpkin.

He is most impressed by his aunt’s lodger, the smooth-talking Kelly (Pat O’Brien), who dresses flashily, seems to know everyone, and has a pretty girlfriend, Peggy (Bette Davis). When he learns that his uncle has lost his job, Jimmy asks Kelly – who claims to know all the important people – for a job so he won’t be such an imposition. Kelly promises him $25 a week if he will stay in his makeshift office, take phone messages, and keep schtum if questioned by anyone who enters.

Jimmy is thrilled… until, on his first day, the police arrive and seize bootlegged liquor, and haul him up before the juvenile court. Jimmy waits forlornly for Kelly’s connections to come and rescue him. He refuses to name Kelly when questioned by the judge, just as he promised, but Kelly is nowhere to be seen. The judge gives Jimmy three years in the State Industrial School for Boys. Harsh.

We are treated to some pretty standard new-chum-in-jail routines, such as an immediate misunderstanding with another boy, Shorty (Junior Coughlin), which in no time develops into a firm friendship. And some not-so-standard: the brickworks, for example, where the boys are sent to work, include teetering piles of bricks on which the boys balance as new bricks are thrown to them to make the piles even teeteringer. And on which Jimmy has his trousers pulled down when his arms are full of bricks.

In recognition of his goodness, Jimmy is suddenly promoted to the trusty role of ‘Monitor’ – the principal function of which seems to be to keep guard over the boys in the ‘Correction Room’ who have to stare motionless at a white line on the wall for hours. He also gets to deliver meals to Shorty who has descended into delirium while serving six days in solitary for trying to smuggle out a letter from Jimmy to Matt Kelly. Shorty had refused to divulge who had written the letter and, like a true friend, was taking the rap in solitary for Jimmy, despite having a weak heart…

Jimmy angrily tosses in his Monitor’s job when he is not allowed to accompany the hallucinating Shorty to hospital, and then escapes in a rubbish truck in order to get help for his ailing buddy. On the run, he lands back on the doorstep of his aunt and uncle – who had no idea where he had been. With the Police hot on his trail, Jimmy, Kelly and Peggy find themselves in the office of the high-powered editor of The Times newspaper who had been trying to do an exposé on abuses at the Industrial School. Kelly asks Gebhardt to keep Jimmy from going back to the reform school. The stumbling block is Kelly himself, who is very reluctant to repay the favour Jimmy did him and own up to being the bootlegger to save the innocent boy from taking the rap on his own. Hence the “What are you, Kelly? A man or a rat?” speech.

In the end, Kelly comes good, commits himself to telling the truth and to going to jail to save Jimmy. But it is too late for Shorty, who succumbs to his weak ticker.

There are plenty worse prison movies (and I’m not even sure that this measures up as a prison movie, given the amount of screen time devoted to less important things). Its strength is partly in its avoidance of the temptation to overstate. No-one tells us that the brickworks are inappropriate for kids and dangerous; we see it. No-one complains about cruel punishment; we feel it. And when Gebhardt is taken on a tour of the reform school, he doesn’t need to say that he knows is being snowed as he is shown the supposedly little-used punishment block with its comfortable cells, and the boys all studying their books in silence in the ‘Correction Room’; we know that he knows. But who would have thought that a prison would ever shield its uglier bits from view, or worse – construct a not-entirely-accurate picture of life in the prison – to appease an official on a tour? Mind-boggling. 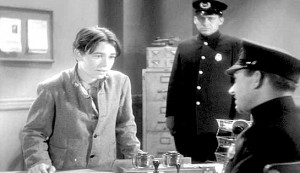 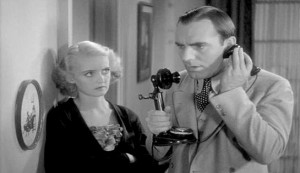 But I can’t leave it there, without including two iconic scenes from the movie; the brickworks, with the detainees perched precariously on stacked bricks, and the ‘Correction Room’ where the detainees being punished, some of whom are seated, some standing, have to stare at a white line on the wall for hours: 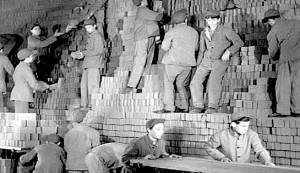 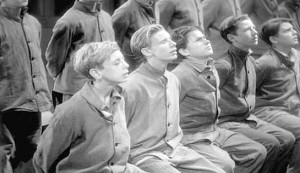