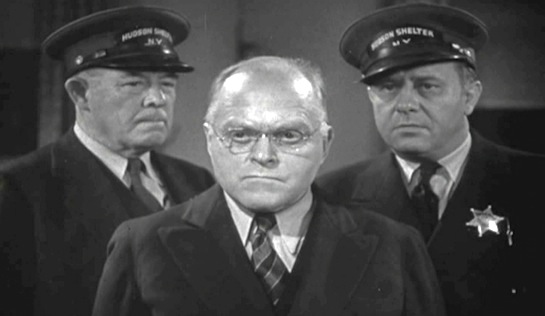 I’ve been dudded, I’m afraid. Nearly all the internet synopses of this film say things like, “a paroled ex-con tries to go straight and reform a brutal reform school, only to face a frame-up courtesy of the school’s corrupt warden.” But it’s not a reform school at all, but a place to which boys from reform school are paroled (and the ‘paroled ex-con’ is not on parole, and the frame-up is not chiefly the warden’s doing). Anyway, this has the dubious honour of having absolutely no prison in it at all, although when the uniformed guards use their batons against the residents, it does seem a little like a juvenile jail. Oh well.

It starts with New York racketeer Buck Caesar (Stanley Fields) being sentenced after being convicted of smuggling and fraud. He’s given a big fine and an 8-year suspended sentence, but tells the judge he doesn’t understand because of all the “big legal phrases”. The judge leaves it up to his bailiff to translate: “De rap is costin’ you 85 Gs in cash and eight stanzas in the zoo, but you don’t gotta go to the zoo providin’ you keep your snozzle clean. You’re strictly behind de 8-ball so you don’t even dare spit on de sidewalk or it gives de woiks. Den he says, if you kiss off de rackets and go stuffed shirt, a year from now you step in and cool off de beef and square ya.. but it’s gotta be good, so get in and pitch. And he do mean you. Cetch?” It might be the highlight of the film.

Fields’ Buck is not unlike his character ‘Bull’ Bransom in Blackwell’s Island (also 1939) – a tough gangster with some decidedly childlike qualities and a fondness for malapropisms. Guided by his nephew and lawyer, Jim Donahue (Ronald Reagan), he opts to donate his stuffed shirt time to the Hudson Shelter for Homeless Boys, to which he has made sizeable donations in the past, so that he can go back to court in a year and demonstrate to the judge that he’s rehabilitated.

But the Hudson Shelter is not what he thought it to be. It is run by a very benign-looking but corrupt and heartless superintendent, Hiram Krispan (Grant Mitchell); the boys are underfed (Jim: “You wouldn’t feed [the food] to a cop.” Buck: “Is it that bad?”), mistreated and brutalised, Krispan is surrounded by his family members who keep a tight rein on things, and none of the philanthropic donations are ever used for their intended purpose but line Krispan’s pockets.

Buck assumes control and immediately reinstates Beth Avery (an advocate for the boys sacked by Krispan). He establishes a form of self-government for the boys, pays them for the work they do, and gives them time off. He also creates a successful ice hockey team, and later books New York’s Ice Palace to hold a match against the Gladstone School for Orphans.

But Buck’s enemies are a step ahead of him. One, Mike Garvey (Fred Tozere) stacks the Gladstone team with professionals, knowing that Buck couldn’t resist a bet and that if he were to discover the ruse he might punch Garvey on the nose and have his 8-year jail term reinstated. Garvey used to be in Buck’s gang but objected to Buck going straight, so Buck clocked him on the jaw. Garvey is out for revenge.

The hockey game and the revenge strategy both go Garvey’s way; the Orphans smash the Homeless and Buck tumbles and smashes Garvey. Buck flees to a country retreat, and in his absence Krispan reverts back to his rules at the Hudson Shelter. He makes a big mistake, however, in putting one unwell kid, Joey Richards (Bobby Jordan), in the coolroom for nine hours as punishment, and Joey dies of cold. Krispan tries to cover up the death, but the boys mutiny and are about to lynch Krispan when Buck arrives back – having been alerted by Jim and Beth – just in time to prevent the boys doing something they would regret. He makes a big speech to them exhorting them to obey the law and not follow his path, and puts Jim and Beth in charge before manfully going off to serve his jail term.

This is another vehicle for the Dead End Kids, who also starred in Crime School (1938) and half a dozen other movies, but they take a back seat to others in this one. It’s a little predictable and formulaic, but has some moments of humour… and Reagan is better than I expected. It’s just a shame there’s no prison.